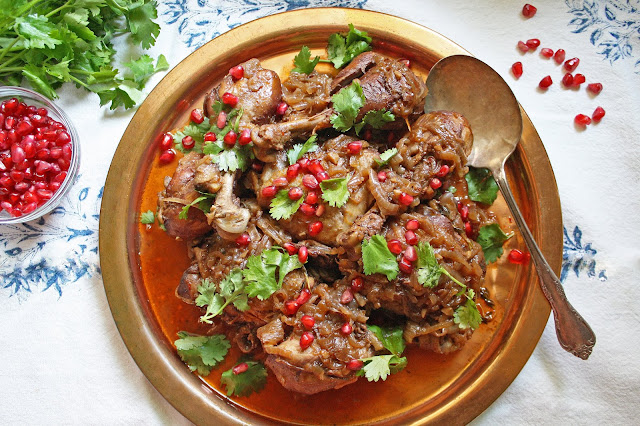 For the full article, head over to The Nosher!

As documented by the queen of Jewish cooking, Joan Nathan, and by Georgian food guru, Carla Capalbo, the Georgian Jewish community traditionally makes chicken cooked in pomegranate juice for Rosh Hashanah. It’s a perfect recipe for the High Holidays: sweet, tart, flavorful, and eye-catching. This recipe is an adaptation from multiple recipes for this dish, but in any variation the chicken is braised in a generously-spiced, fruity pomegranate juice-based broth, and then topped with fresh red jewel-like pomegranate kernals.

The pomegranate juice adds expected sweetness, but there’s also an assertive and awakening tang that comes through, especially with the addition of tamarind and pomegranate molasses. The copious amounts of onion and garlic add deep levels of sweet and savory flavors to the dish. The coriander, hot pepper (not too hot), and thyme play off each other with their respective perfumy-ness, heat, and minty-ness. It is Rosh Hashanah, so a hint of honey makes its way into the pot to remind you of sweetness without being at the forefront of the show. After 15 minutes at high pressure, the chicken barely clings to its bones, and the sauce becomes rich with and fortified by the golden schmaltz left over from browning the chicken. Take the chicken out and let that liquid simmer (still in the Instant Pot), and the mahogany-colored sauce will thicken and become silky and as decedent as a festive meal demands. Once the chicken and sauce are plated, you shower them with the bright green fresh herbs and the glistening ruby red pomegranate. Dark meat works best for this, but you can certainly make it with white meat as well. And like all great holiday dishes, you can make this several days in advance and it only gets better when reheated. It also freezes well, just leave off the fresh garnish until right before serving. And yes, if you really don’t want to cave to culinary social pressure, you can make this recipe the old fashioned way.

Instant Pot Georgian Jewish Chicken in Pomegranate Juice
Serves 6-8 (recipe can be doubled)
Start by generously seasoning your chicken with salt and pepper on both sides.

Turn your Instant Pot or pressure cooker to the sauté setting, which should produce high heat for browning. If needed increase the heat to MORE or according to the manufacturer’s instructions. Once the pot is hot, add a drizzle of oil. Brown each piece of chicken until golden brown, about 3-4 minutes on each side. Cook the chicken in batches so as not to crowd the pot and cause the chicken to steam instead of brown. On the stoevtop, brown the chicken in a large pot or Dutch oven on medium high heat.

Once all of the chicken is browned, transfer it from the pot and reserve.

Next, add all of the onions to the same pot so that they can cook in the remaining chicken fat. If your chicken did not release very much oil, and another tablespoon or two of oil to the pot. Season the onions with salt and sauté for 5-6 minutes or until softened and starting to slightly brown. Add the garlic, coriander, and paprika to the pot and sauté for an additional 1-2 minutes, or until fragrant. Add the tomato paste, and stir everything until the onion mixture is well coated in the tomato paste. Nestle the reserved browned chicken back into the pot. Press CANCEL to turn off the sauté function on the pot. Follow the same steps on a stovetop.

Add the pomegranate juice, pomegranate molasses, tamarind paste, honey, thyme and bay to the pot. Place the lid on the Instant Pot, close the pot and seal it. Press the POULTRY or MANUAL setting and set the time to 15 minutes. Let the steam naturally release for 10-15 minutes, and shift the valve to venting if more air needs to be released. On the stovetop, cover the pot and simmer for 30 minutes on medium-low or until the chicken is tender and cooked through.

Press CANCEL, open the lid and transfer the chicken to a platter and lightly cover with foil to keep the chicken warm. Remove the bay leaf and thyme stems. Turn on the SAUTE function again. Allow the sauce to simmer and reduce by half, or until its reached your desired thickness. On the stovetop, turn the heat to medium-high and simmer.

Once the sauce has reduced and thickened, pour the sauce over the chicken. At this point you can keep dish warm in a low oven, or you can cool it and freeze if making in advance.

Just before serving, garnish the chicken with the fresh pomegranate and roughly chopped cilantro or parsley. 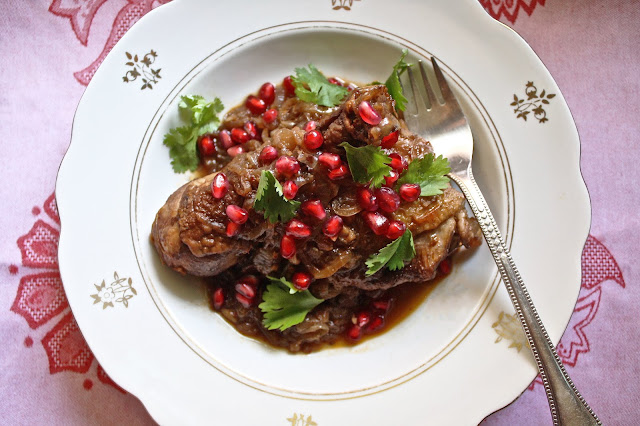 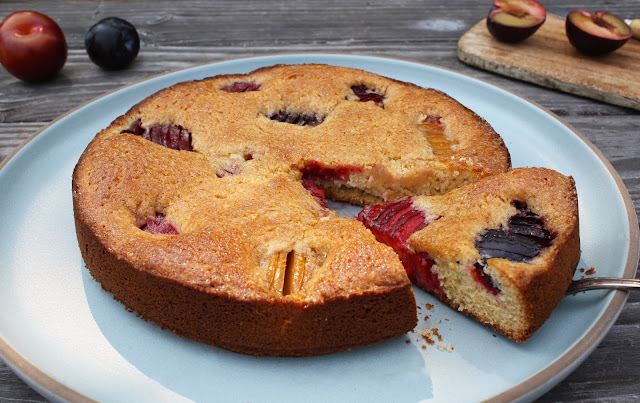 For the full article head over to TheNosher!

This is a simple cake to make with lots of flavor. I add ginger to the batter for its warmth and zing, and cardamom for its subtle and welcome citrusy spiciness. The ginger and cardamom’s perfumy-ness and subtle heat also serve to accentuate the fruitiness in the plums. You can use any plum or pluot for this cake, and I like ones that are slightly firm and ripe, and not too small. This recipe can be made dairy free by using vegan butter, and the flour can be swapped for a gluten free all purpose mix. Like any good holiday recipe, sunken plum cake tastes even better made a day in advance. At dinner, I love to serve the cake topped with whipped cream or ice cream, but this also makes a delicious indulgent breakfast treat. 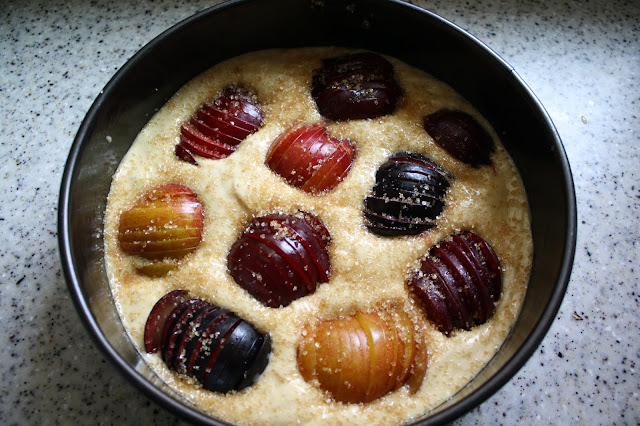 Directions-
Preheat the oven to 350°F.

Grease and line a 9” springform pan with parchment paper, or you can also make this in a 9” x 9” baking dish.

Cream together vegan butter/butter and sugar until light and fluffy, about 3-4 minutes, using either a handheld mixer or stand mixer with the paddle attachment.

Add the honey to the sugar mixture and mix until well incorporated.

Add the eggs, vanilla, and freshly grated ginger and mix until they are also well incorporated.

Sift the flour, baking powder, salt, and cardamom together. Slowly add the dry ingredients to the wet ingredients, and mix until just incorporated. Be careful not to over-mix.

Pour the batter into the lined and greased cake pan. Add the sliced plums on top of the cake, they will sink as they bake. Top the cake with a generous sprinkling of Turbinado/raw sugar, or regular sugar if you don’t have raw sugar.

Bake 35-40 minutes, or until a cake tester comes out clean when tested in the center of the cake.
If desired, you can brush honey on top of the cake once it has cooled: heat ¼ cup of honey until just warm, and then brush it over the cake.

Serve topped with whipped cream or ice cream. Can be made a day in advance. 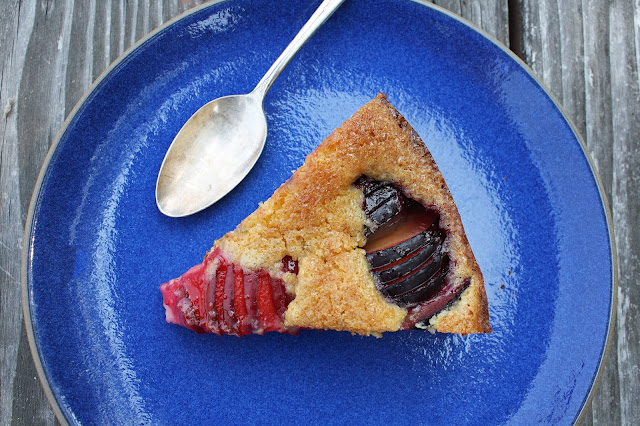