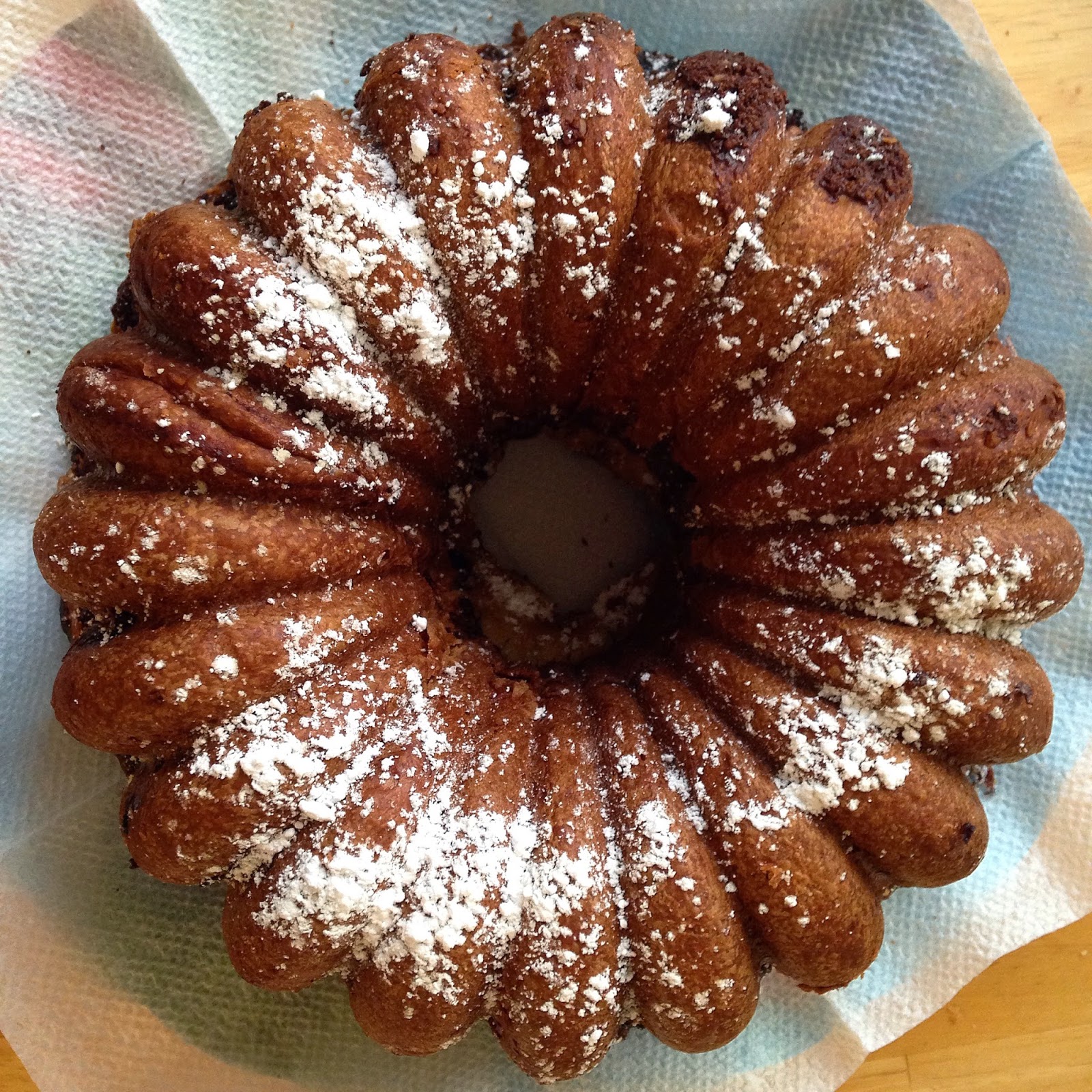 Over the Thanksgiving weekend, I had the great pleasure of learning how to make babka.

At 87, Edith still loves to bake and cook in her kitchen for her children, grandchildren, family and friends. Edith has more spunk than most people have at half her age. Her baking, like many talented cooks, is imprecise and relies on experience and feeling. I was deeply inspired by Edith, her food, and her stories.

That afternoon, Edith taught me her recipes for chocolate babka and walnut cake (both use the same dough) while telling me me stories about her family and her life. At first I was concerned about asking Edith difficult questions about her past. Her daughter, who was with us, assured me that Edith was happy to talk about her experiences. That's one of the many amazing things about this woman - she is incredibly open about her life. She will tell you like it is or like it was, but she does so without anger or hostility. She is aware and grateful for her fortunes even in the context of unfathomable unfairness and inhumanity. I only got to spend one afternoon with her, but it was clear that this is a woman who has an incredible sense of humor, sharpness, wit, and a deep understanding of humanity and the complexities of life. The Shoah foundation recorded Edith's holocaust survival story in full; I'm happy to help you locate it if you want to hear more about her story. 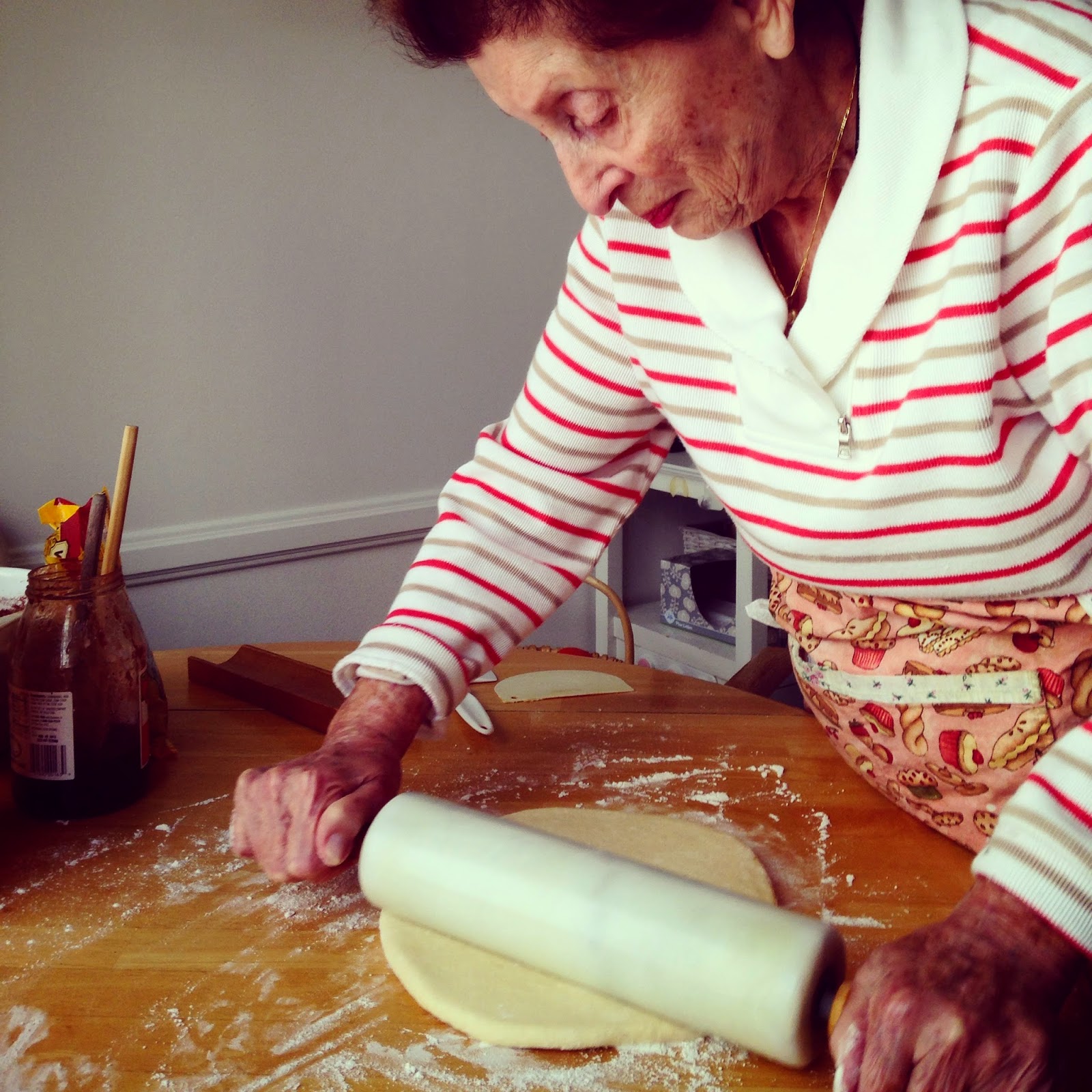 This short synopsis will hardly do justice to her full story, but nonetheless...

Born in 1926, Edith grew up in Lastovce, Czechoslovakia. In 1942, Hitler decreed that all Jewish girls 16 years of age and older had to be reported to the Slovakian government. At that time, 16 year old Edith was sent to live at her aunt's house in Hungary. Many Slovakian Jewish girls fled to Hungary at the time, and the Hungarian police were instructed to hunt them down. Edith hid in the basement of her family's home during that time. After six months, Edith was sent to Budapest; her family felt her chances of survival were better in a big city where she could get lost. Edith worked at an undergarment factory where she somehow managed to get her hands on the birth certificate of a Hungarian non-Jew. She also dyed her hair blonde. One day on a train, Edith was caught by two detectives. Unimaginably, during a time of war and bloodshed, not one but two detectives were on the case of tracking down a single Jewish girl in Budapest. Edith was sent to what was essentially a holding camp. She was there for about 6 months. Whenever the Germans were bombing, all the Jews were sent upstairs to the upper level of the building so that if the building were to be bombed they would perish. After 6 months, Edith was sent to Auschwitz. From Auschwitz, Edith was sent to the Liebau concentration camp. At the camp, there were approximately 200 women and 200 men that were kept separate from each other. The men and women were mostly young, and were forced to do excruciatingly hard labor. When Edith speaks of this, she talks about how impossible it is to explain the pain of hunger, the pain of the particularly horrible lice, among all the other types of pain. Edith managed to survive, and her camp was liberated by the Russians. In fact, Edith was liberated by a Russian Jewish general who made it his mission to protect the girls from being raped by other Russian soldiers (something that was happening), and made sure that they did not eat the food the Germans left behind (which was often poisoned).

After the war, Edith returned to Czechoslovakia. Two of her brothers had also survived the war. Back in Czechoslovakia, Edith was set up on a blind date. Edith and her future husband clicked right away. They were married for 65 years (what's the secret? there's no secret. But don't go to bed angry, don't think relationships are a perfect 50/50 partnership, be willing to ungrudgingly compromise, and it helps if your husband tells you you're beautiful in the middle of an argument). Her husband passed away a few years ago at the age of 90. In 1948, Edith and her husband left Czechoslovakia for Israel where they lived for 10 years before immigrating to the United States to start a new life with their two daughters.

Edith originally got this recipe from a friend of hers. To the delight of her family and friends, Edith has been making this babka for many years. I have never seen babka prepared in a bundt pan, but it's pretty genius (and beautiful). This is a dense, chocolate-y, rich dessert with a lovely dough. If you need an exact recipe, I recommend you google "babka." If you're looking for a recipe with room for error and customization, see below.

I am so grateful to have heard Edith's stories and to have learned this recipe. 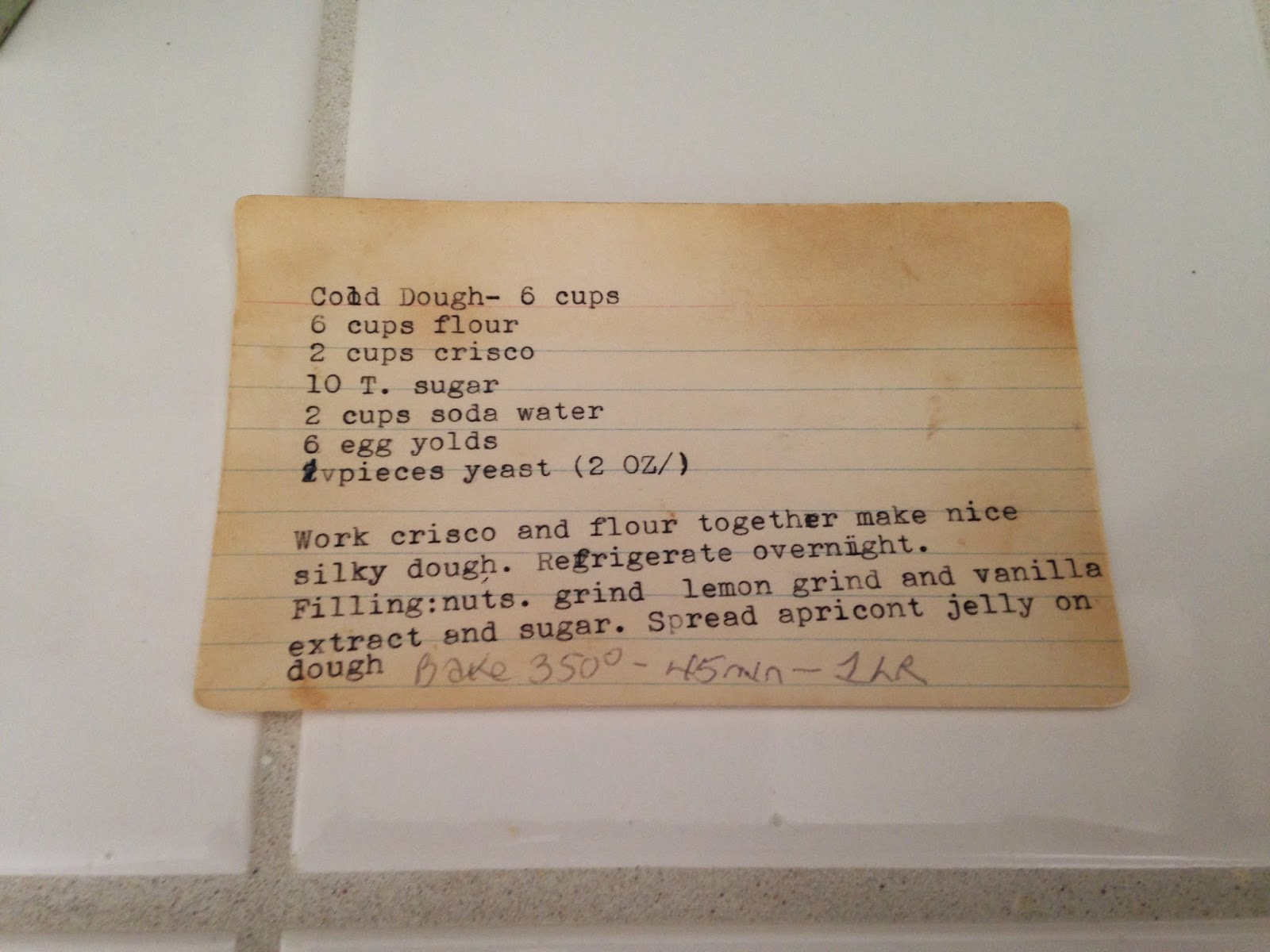 In the bowl of a stand mixer fitted with the paddle attachment, combine 3.5 cups of flour (you can add more flour later if the dough feels too wet). To the flour, add the cubed crisco. On level 1 or 2, mix the crisco and flour together until pea sized pieces form and you have a coarse meal.

Add the egg yolks, sugar,  activated yeast, and seltzer water to the mixer. 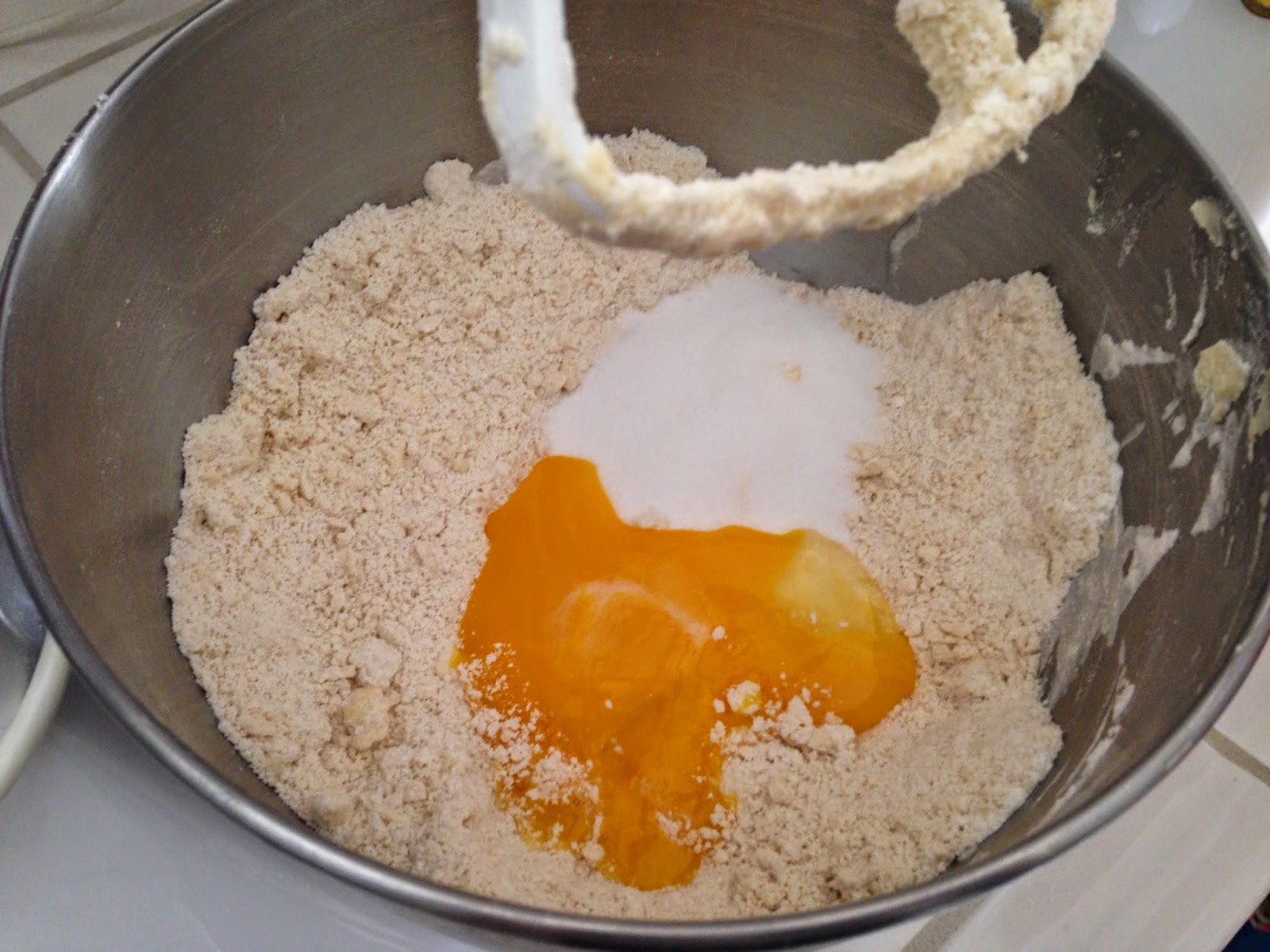 Add a little oil to a mixing bowl (either olive or vegetable is fine). Transfer the dough to the oiled bowl. Kneed the dough 5 or 6 times in the bowl. Cover the bowl with foil or plastic wrap, place a towel over the bowl. Let the dough rest overnight in the fridge.

for the babka-
Dust a flat surface with flour, and place the dough on the flat surface. Cut the dough in half, and roll the dough out into a large rectangle, about 15 inches long and 1/4-inch thick. 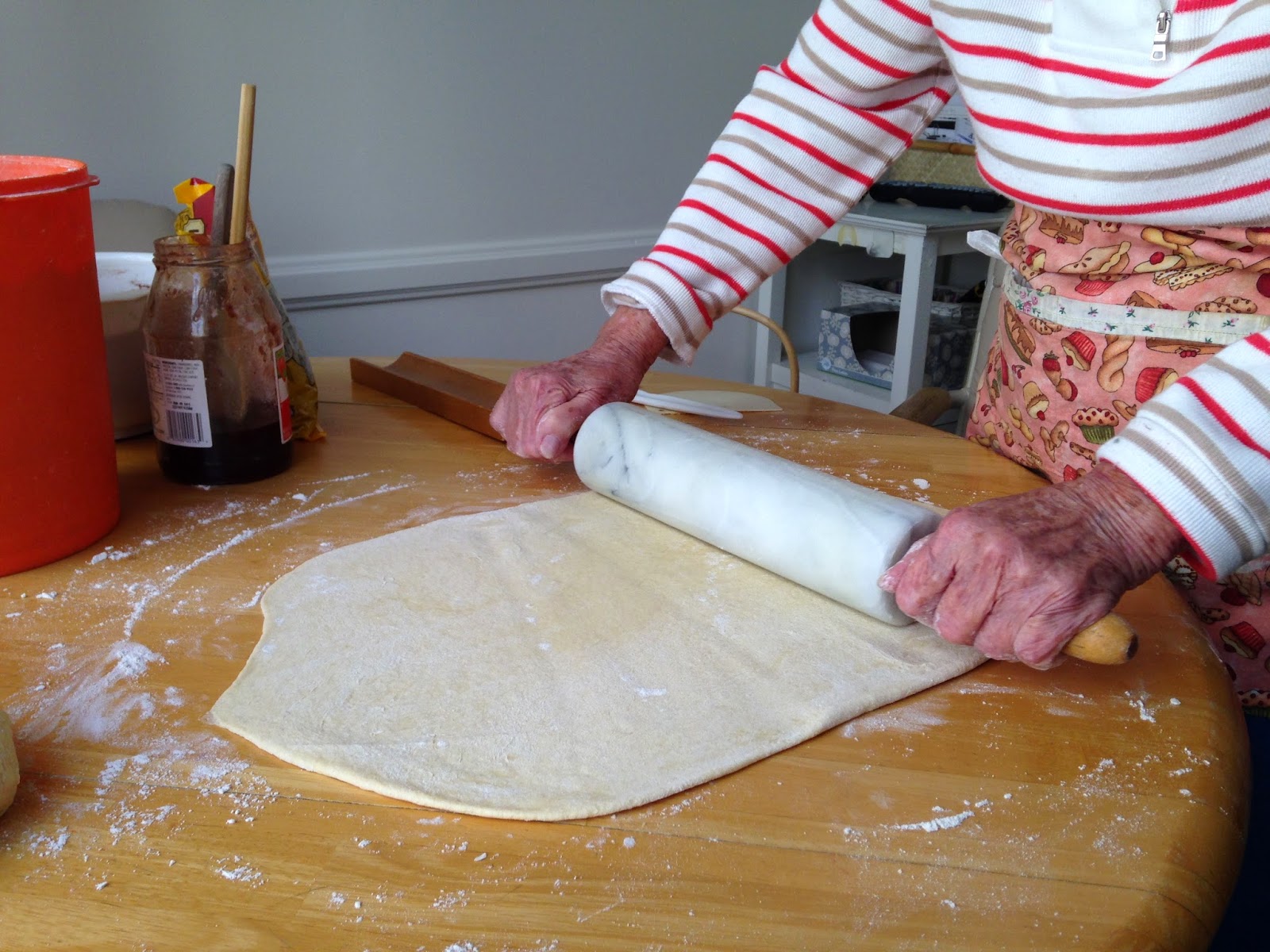 Spread a thin layer of jam onto the dough leaving a 1-inch border around the sides. 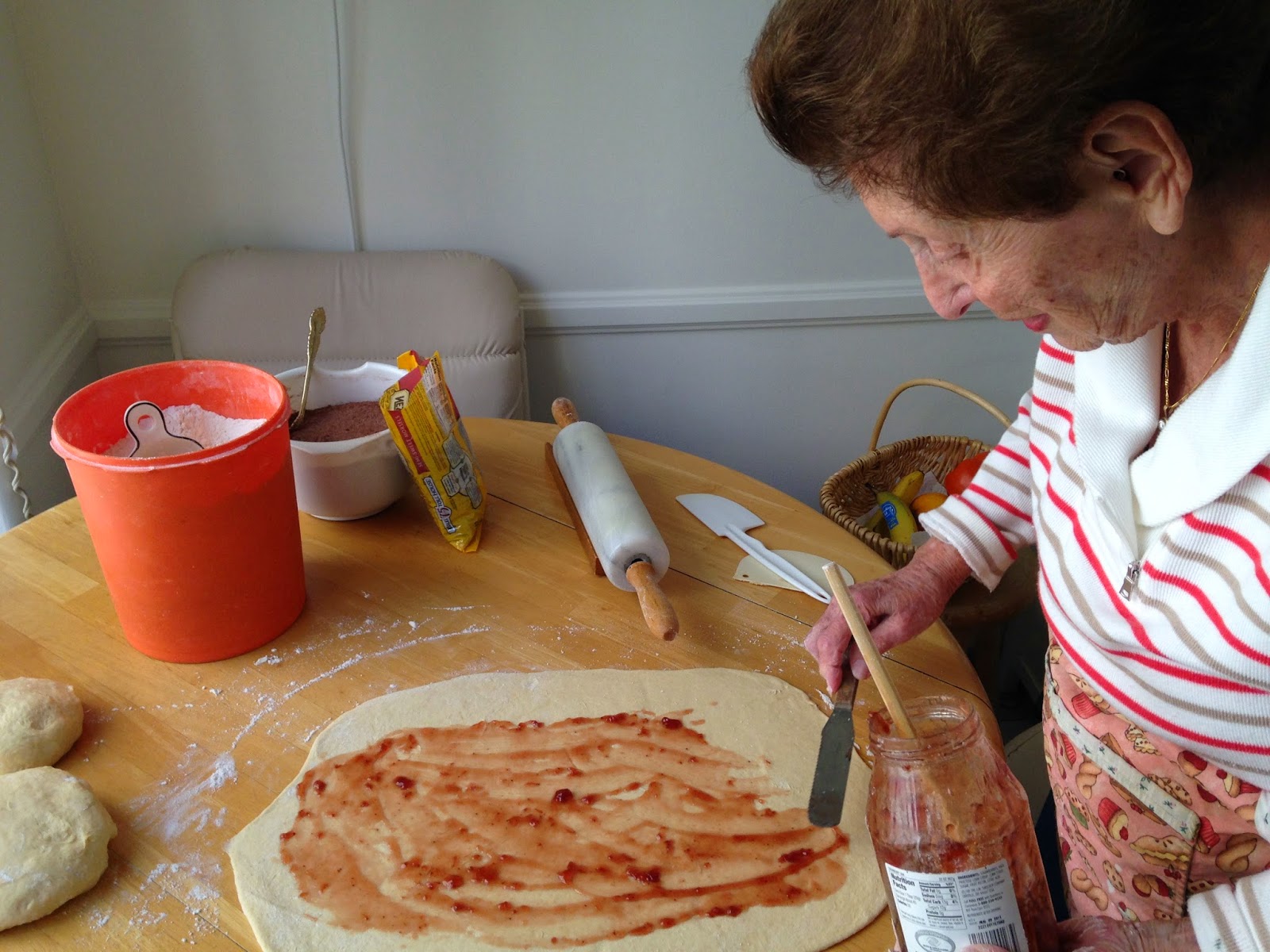 GENEROUSLY top the dough with the cocoa and nut mixture. (I do not have amounts for this. Edith combines cocoa powder with sugar, walnuts and vanilla extract. I would blitz all of this in a food processor until it's finally ground. You could do: 1 cup nuts, 1/2 cup of sugar, 1/4 cup cocoa powder, 1 tsp vanilla - taste and adjust to your liking). 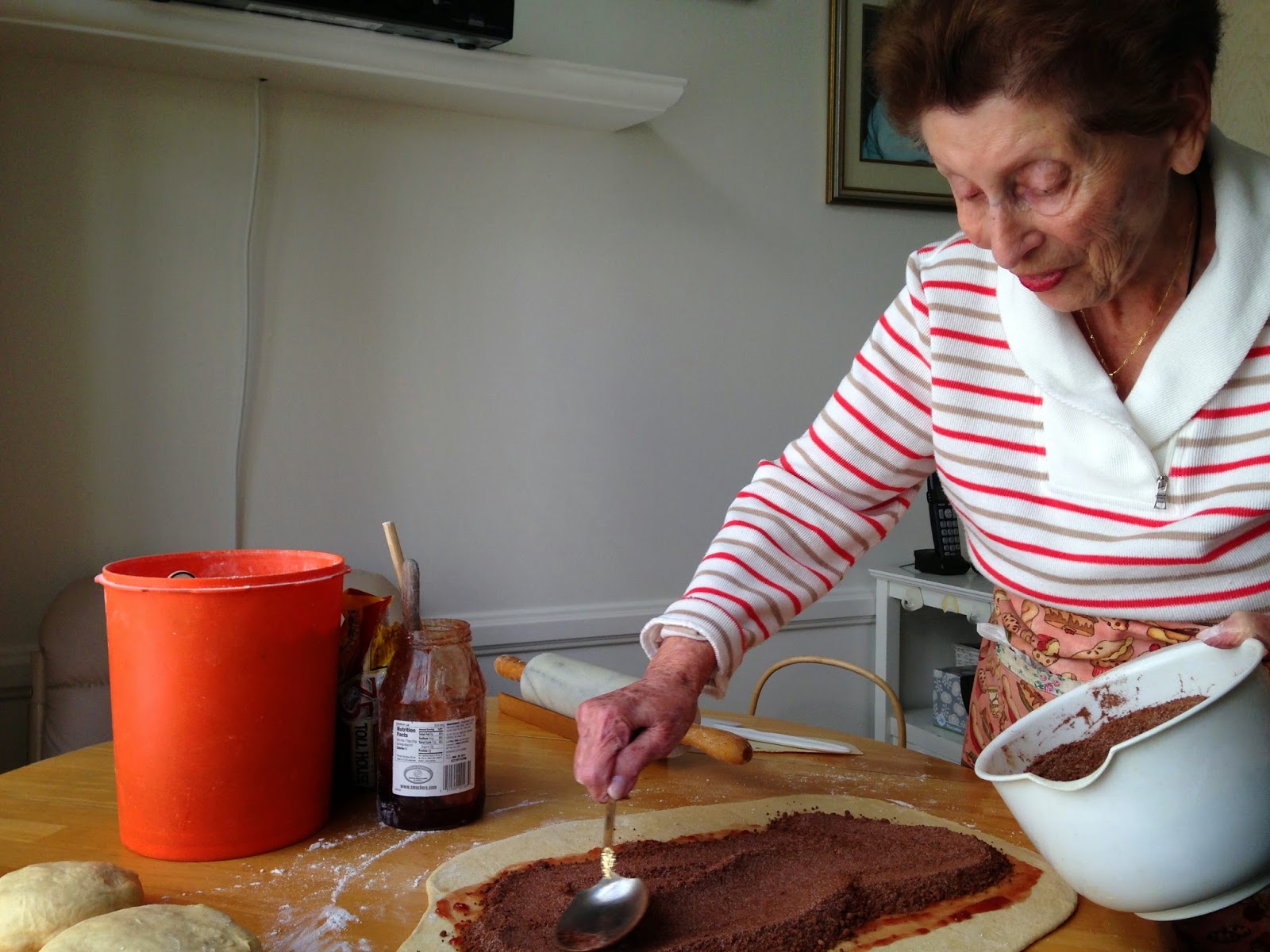 Don't be stingy! Add a handful of chocolate chips on top of the cocoa and nut mixture. Edith prefers mini-chocolate chips, but we had regular-sized that day. Once you've topped the dough, wrap it tightly into a roll. 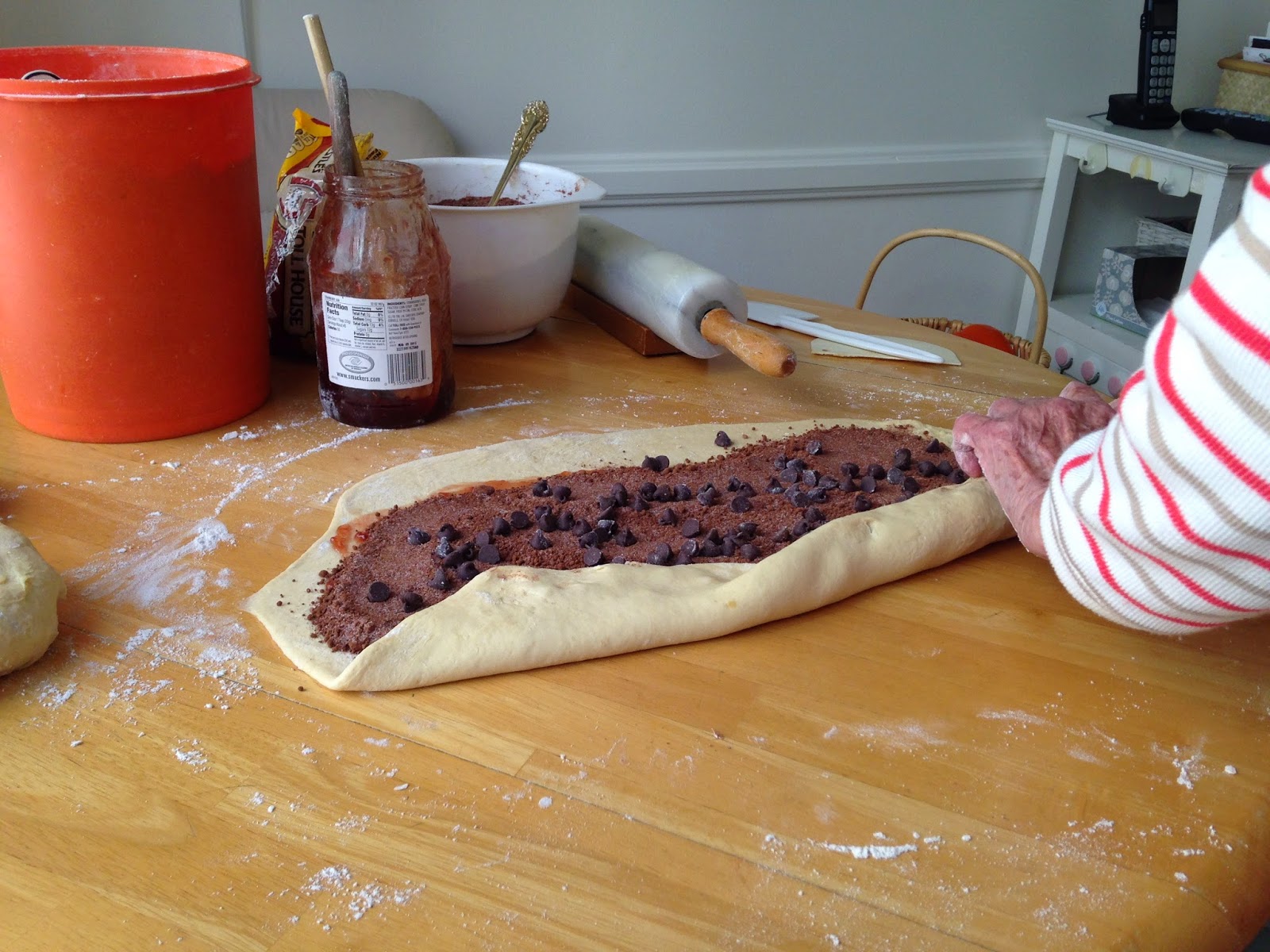 You're almost there. Place this rolled up dough, into the bottom of a greased Bundt pan in a ring formation. 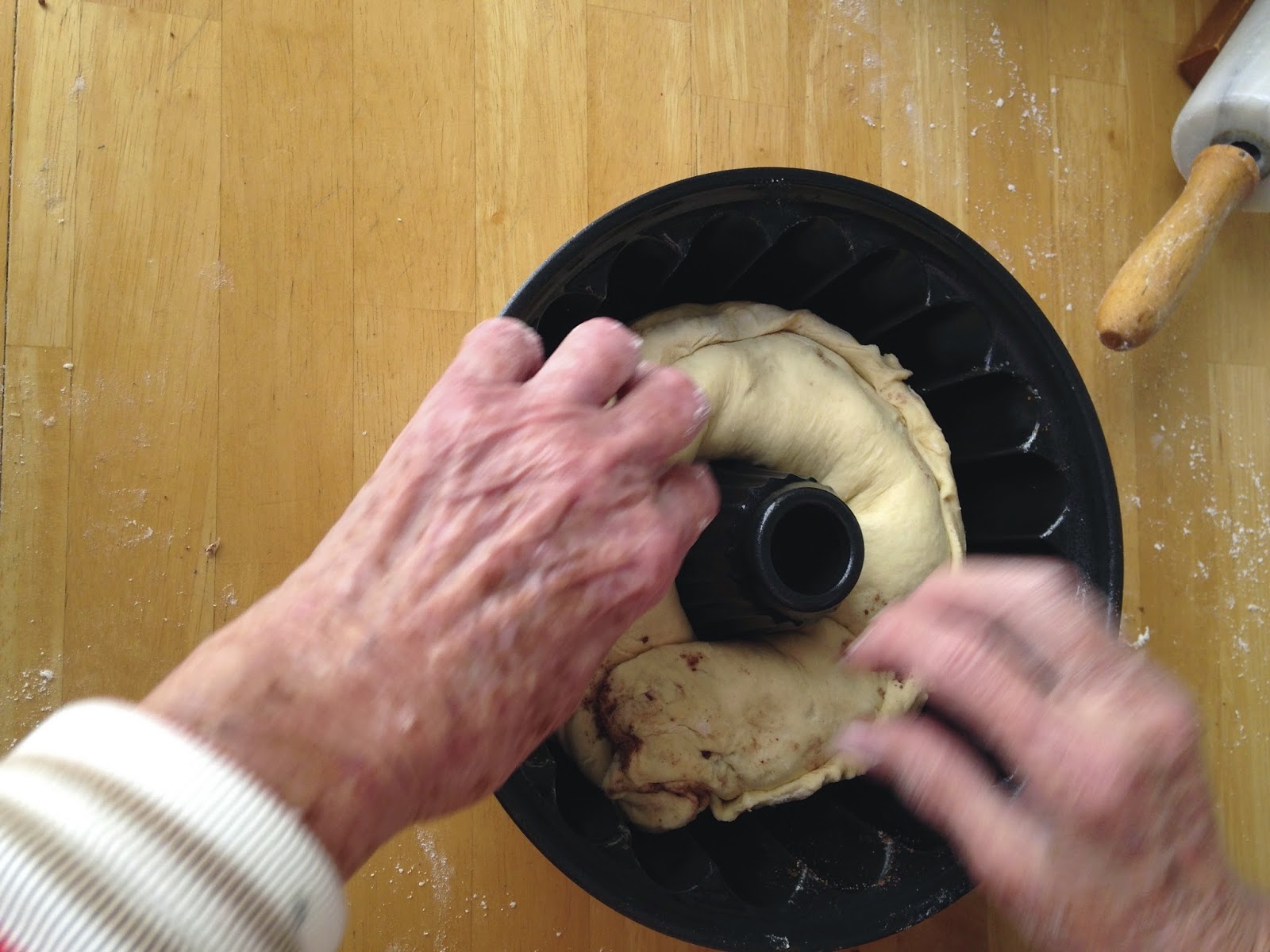 Now, repeat that process with the second half of the dough. Once you've made a second roll of chocolate and jam filled goodness, place it on top of the first ring in the Bundt pan. Press the edges together with your fingers. Make sure the dough is sealed. 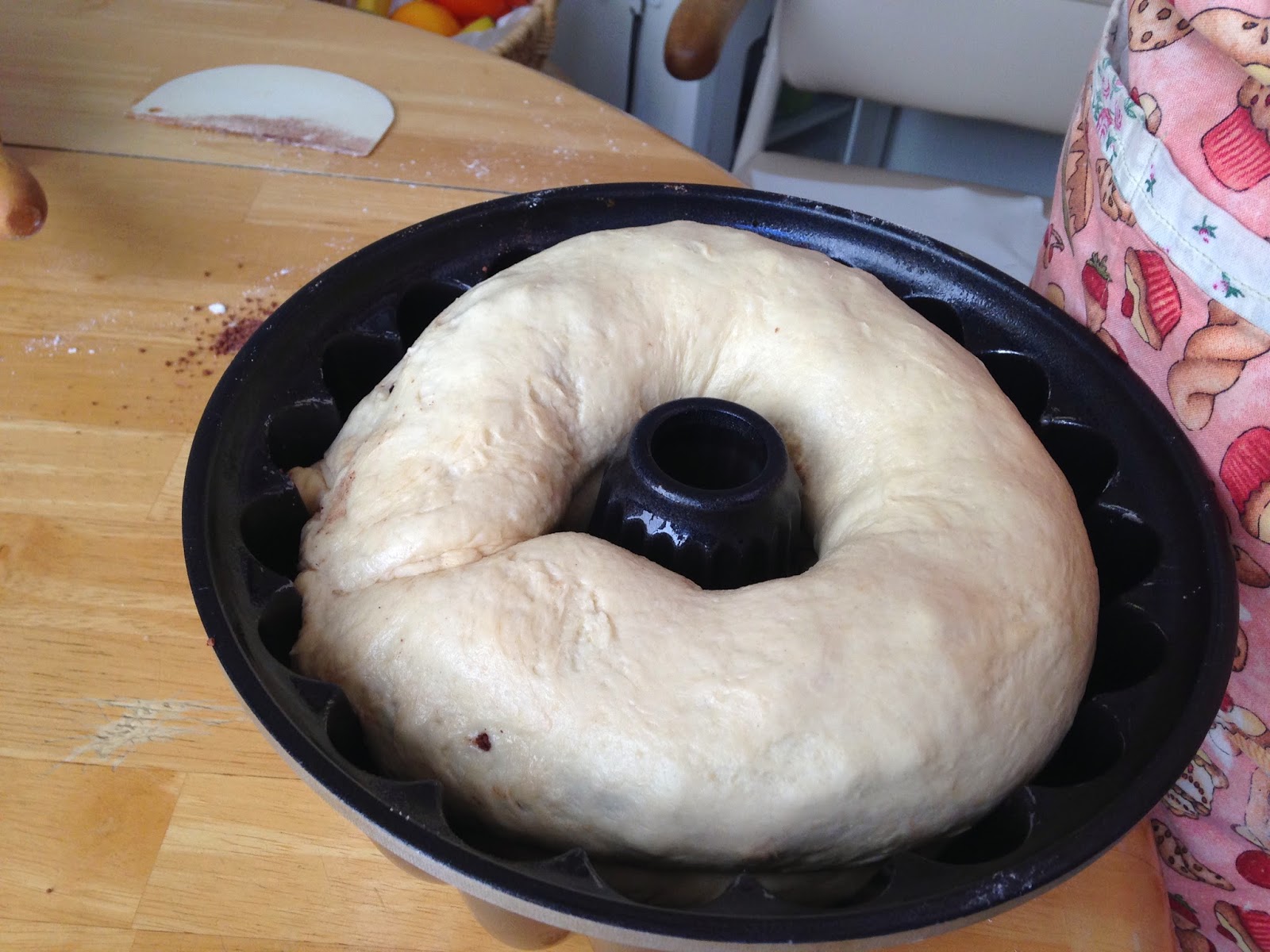 Now, your  babka is ready to go in the oven.

Preheat the oven to 350°F. Bake for 45 minutes uncovered, and then cover the pan with foil and bake for another 45 minutes.

Let the babka cool on a rack in the Bundt pan for at least 20 minutes. Then, hope and pray that it will easily come out of the pan when you try to pop it out onto a serving plate. It seems to be easier to get the cake out of the pan after it cools for a bit.

Dust the babka with powdered sugar, slice, and serve with a hot cup of coffee or tea! 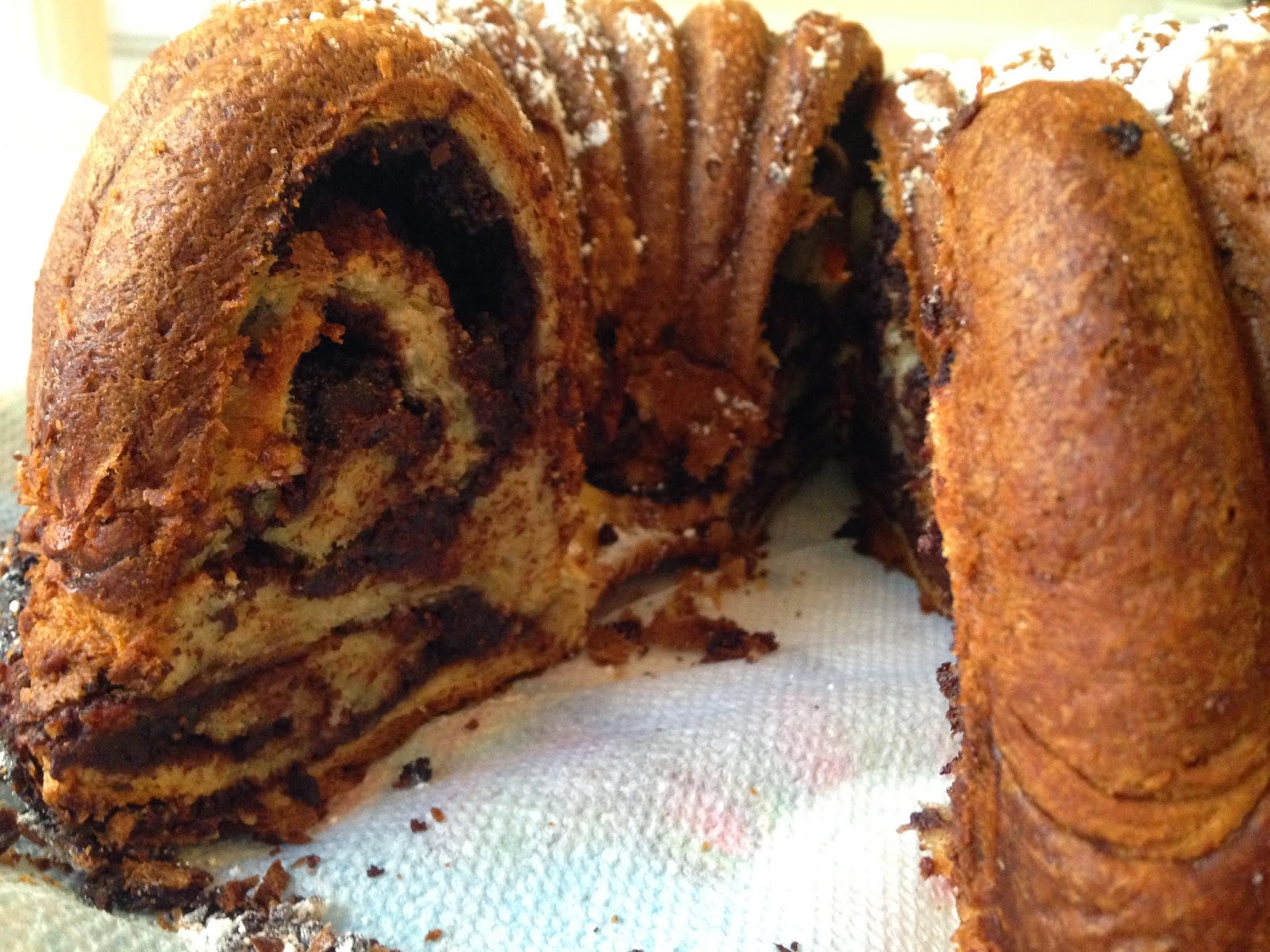 This babka freezes well. It can be baked, then frozen and reheated when ready to eat.
Posted by Sonya at 4:09 PM