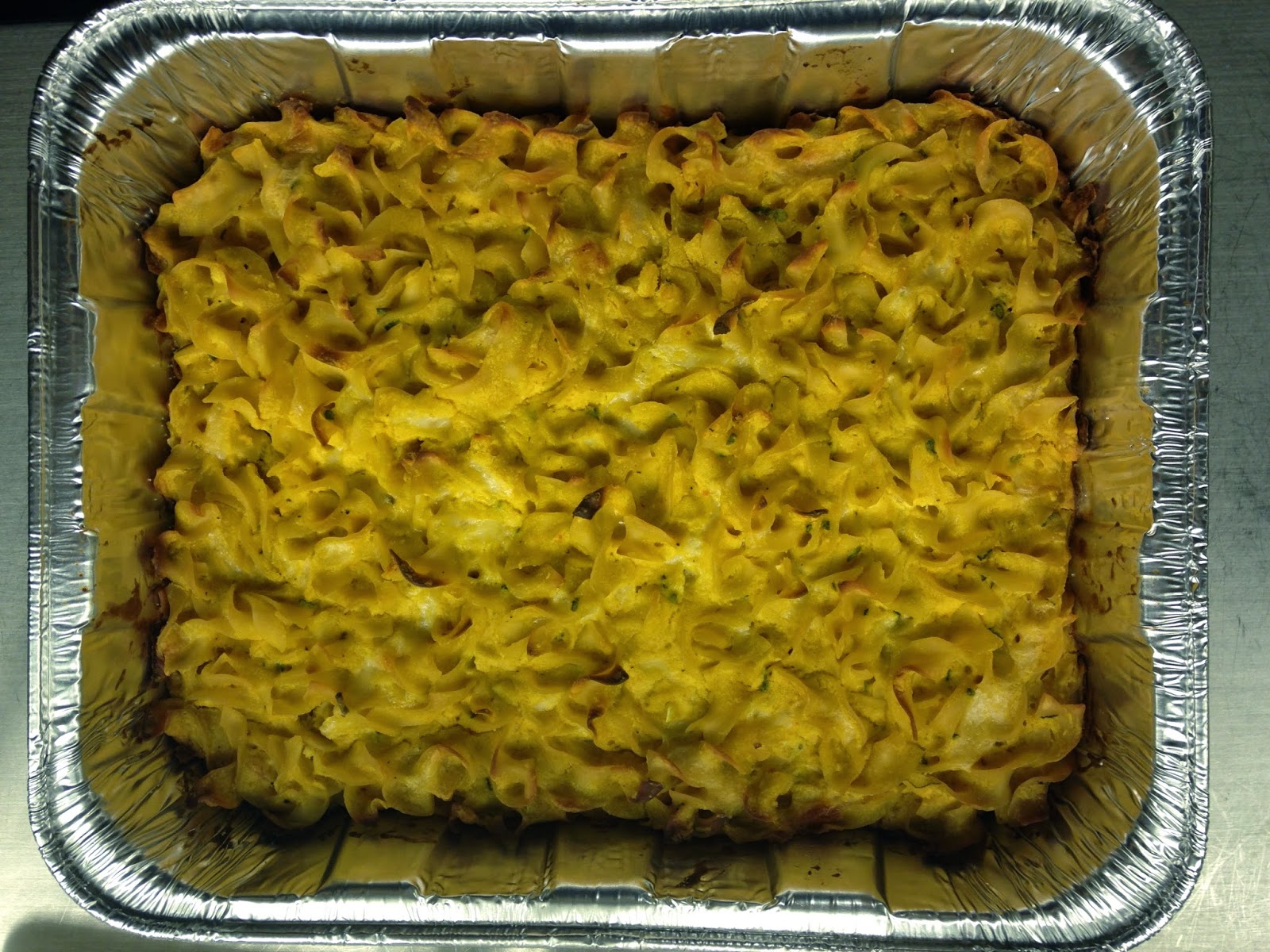 Growing up kugel was completely absent from our Russian Jewish immigrant table. We had matzo balls, latkes, chopped liver, borscht, stuffed cabbage, herring... you name it. But kugel never showed up. (That said, somehow my mom's very un-Russian famous dish was noodles and cottage cheese... in a way that's a stripped down deconstructed savory form of kugel.)

Sometimes I ate kugel at friends' houses or at shul or wherever Jews congregated with homemade food. I am not a picky eater. I never was, but kugel always rubbed me the wrong way. Sure, I'd eat it but then immediately think,"Why is this so sweet and dense? Why does it have raisins??? Why?! Why cottage cheese??? Why not any other creamy cheese that isn't salty and dry and curdy?" I just didn't get it. I mean I got it, but I wanted it to be better. I wanted more for kugel.

The picture above isn't glamorous because kugel isn't glamorous. For me, kugel is meant to be a dish served for a crowd that is hearty, filling, and comforting. It should elicit feelings of warmth and sentimentality. It should be something that can be made ahead, eaten warm or cold, right out of the oven or as leftovers for lunch the next day. It should be something that doesn't detract from a main dish, but makes the meal feel more complete. Kugel should be able to find a place at any holiday or shabbat table. But it needs a serious makeover...

This brings me to this recipe. I'll start by saying this is one of the easiest recipes I've ever developed; if you can boil pasta and combine stuff in a bowl, you're good to go. I've actually found quite a few variations of traditional kugel out their in the world... but I wanted to try to make one that I could personally get excited about. If you're a sweet-kugel kind of person, more power to you. You could probably eliminate the savory elements in this recipe and add about a 1/2 cup of sugar and maybe some cinnamon and a little butter and you'll have yourself sweet pumpkin kugel (but maybe don't add raisins?).

This kugel is reminiscent of traditional kugel in that it is made with Manishevitz egg noodles and has a custardy quality, but it's a little unexpected. The truth is this kugel veers into mac n' cheese territory. It also has pumpkin, and I'm the first to concede that pumpkin is problematically ubiquitous... but it's good and nutritious and that's what I care about more. It uses ricotta instead of cottage cheese. It has a touch of maple syrup to balance the flavors, and it has garlic to highlight its savoriness. I added sage because I wanted an herbaceous note. I'm not skipping out on eggs or heavy cream, because I don't use a whole lot of either and also because kugel is special.

And I make it with the delicate balance of reverence to tradition, simultaneous hope for old things becoming new, and with love. Lot's of love.

Start by bringing a large pot of salted water to a boil. Add the egg noodles to the boiling water and cook until al dente (cooked but firm), about 6-7 minutes or as directed on the package. Err on the side of undercooking your noodles, they will continue to cook in the oven, and this will prevent them from getting too mushy. Cool and reserve the cooked noodles. 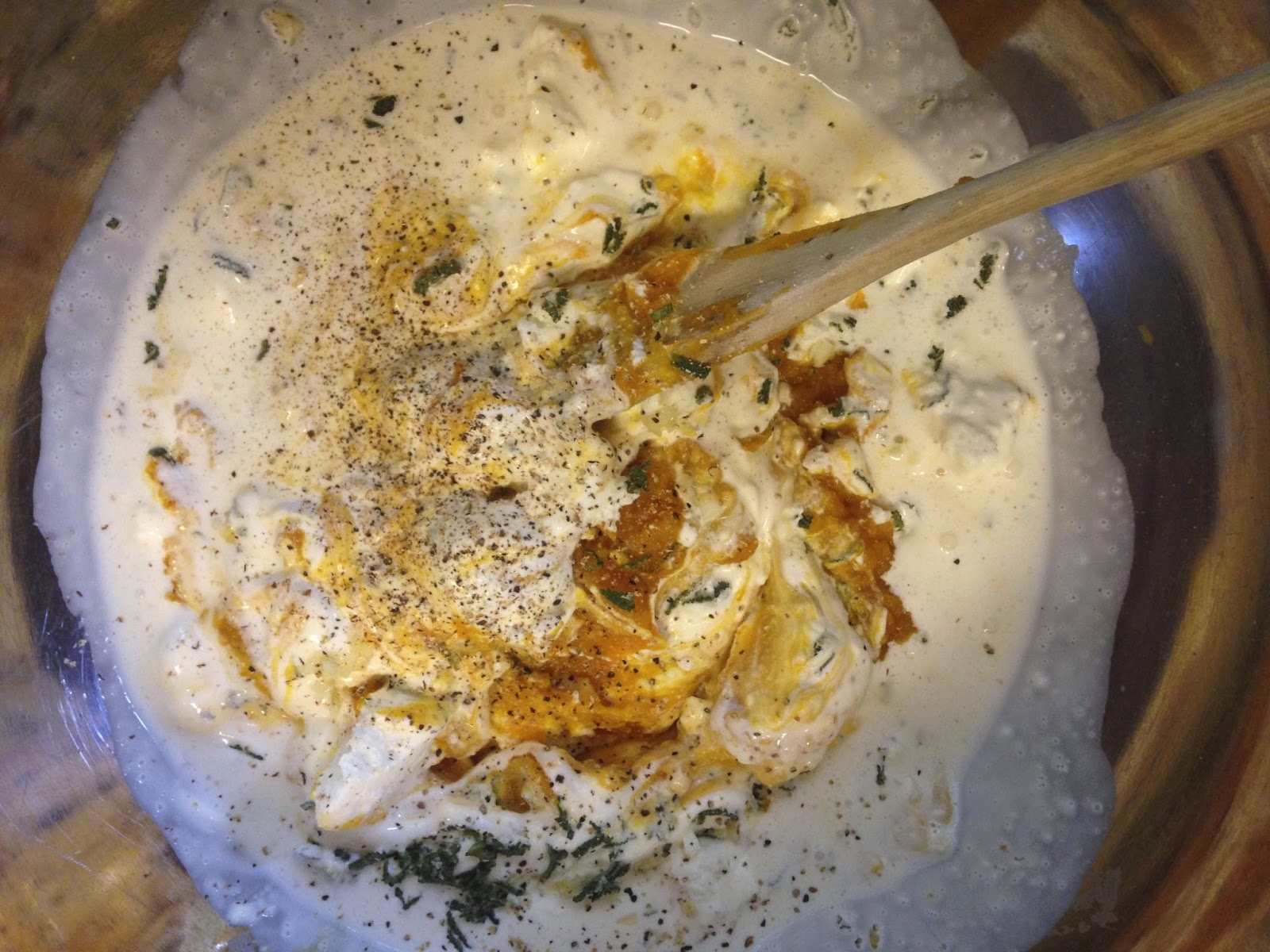 Add the cooked egg noodles to the pumpkin puree mixture. Stir until all of the noodles are coated in the mixture.

To make ahead:
The kugel mixture can be made a few hours ahead of time and cooked just prior to serving.


Alternatively, the kugel can be fully cooked up to a day in advance and reheated just prior to serving.
Posted by Sonya at 4:41 PM