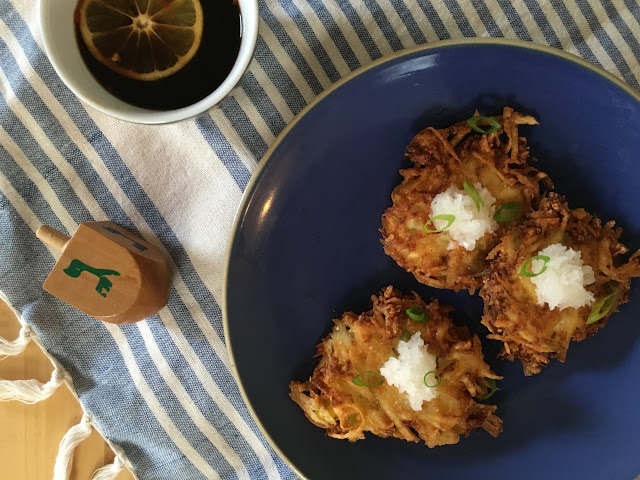 My love of Japanese food led me to reconsider the traditional Hanukkah potato latke served with applesauce and sour cream. Don’t get me wrong, classic latkes are delicious, but sometimes I love a little variety on my holiday table. Traditional Japanese tempura is often served with citrusy Ponzu sauce and finely grated Daikon radish. The salty tangy Ponzu, accompanied with the fresh cool Daikon are as welcome to latkes as they are to lightly fried vegetables and fish. Adding Daikon to the batter as well makes these latkes a touch sweeter and lighter than their all-potato counterparts. Flavorful sharp scallion garnish the latkes and bring a touch of brightness to the final dish.

The recipe can be halved, but you may want to even double it. These latkes will go fast!
Daikon and Potato Latkes with Ponzu Dipping Sauce
Makes 24-27 Latkes, Serves 8-10 (recipe can be easily halved or doubled)
for the latkes-
1½ lbs. (680 grams)  Russet potatoes, about 3-4 medium sized
1½  lbs. Daikon radish (680 grams)
1 large yellow or white onion
3 medium scallions, sliced fine
2 large eggs, beaten
¼ cup all purpose flour (can be substituted with all purpose gluten free flour)
1½ teaspoons kosher salt
peanut or vegetable oil, as needed
for the Ponzu sauce-
½ cup light soy sauce
juice of 1 large orange, about ½ a cup
juice of 1 lemon, about ¼ cup
3 tablespoons mirin
¼ teaspoon red pepper flake, or to taste
for garnish-
½ lb. (230 grams) Daikon radish, peeled and finely grated
sliced scallion, to taste
for the Ponzu sauce-
Start by making the Ponzu sauce. Add the soy sauce into a medium sized bowl. Juice the lemon and orange through a strainer over the bowl of soy sauce. Add the mirin and pepper flake, whisk until combined. Set aside and reserve.
Ponzu sauce can be made ahead and will keep up to 1 week in the fridge.
for the latkes-
Preheat the oven to 325°F/165°C.
Peel and grate the potatoes, Daikon, and onion into a large bowl. Using a clean dish towel, squeeze the moisture out of the combined potatoes, Daikon and onion. This step ensures a crispy latke!
To a large bowl, add the potatoes, Daikon and onion. Add the sliced scallion, beaten eggs, flour and salt to the bowl. Mix until just combined.
Line a sheet pan with paper towels.
Add about ⅛-¼ inch of oil to a large heavy-bottomed skillet, cast iron is ideal. Over medium high heat, allow the oil to get hot. Test the oil with a small piece of potato. If it immediately starts to sizzle and bubble the oil is ready. Form the latkes into small thin patties. I make mine to fit the palm of my hand, but these can be as wide or small as you prefer.
Carefully add the latkes to the hot oil. Brown on one side for 2-3 minutes, flip and brown for another 2-3 minutes. Occasionally, rotate the pan or adjust the heat to ensure even browning and cooking. Like pancakes, the first batch is usually the worst, so don’t get discouraged. When browned and crispy on each side transfer the cooked latkes to the lined sheet pan and allow to rest.
Fry the latkes in batches, be careful not to crowd the pan. Add more oil as necessary to maintain a constant level. Adding more oil will drop the temperature, so adjust the heat as necessary.
Keep the latkes warm in the oven until ready to serve. Serve warm and fresh!
for the garnish-
Using a microplane or the small size on a box grater, grate the Daikon radish. Thinly slice the scallion.
to serve-
Top each latke with the grated Daikon radish and sliced scallion. Serve alongside the Ponzu dipping sauce. 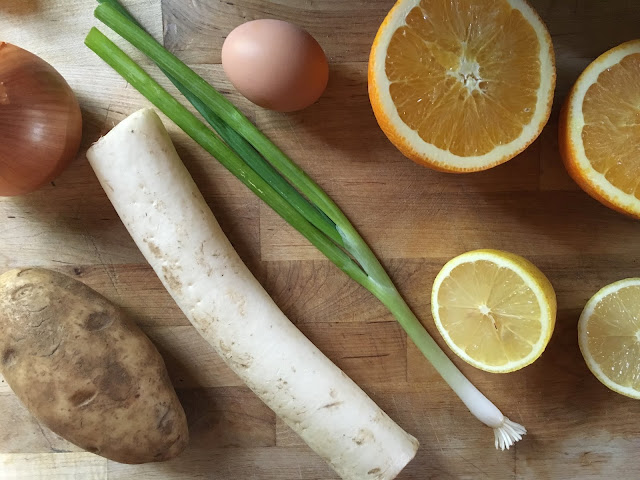