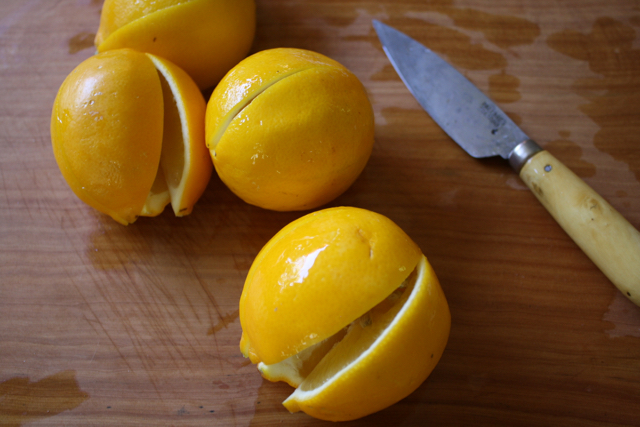 Citrus season in California always seems never ending to me. In a good way. But there is a season, and that season peaks in winter, and spills into spring. The Meyer lemons are still around, but they're definitely on their way out. Before they go, I like to preserve a few jars.

Preserved lemons are some of the easiest of preserved foods to make. They involve little other than lemons, salt, and sanitized mason jars (just boil the jars totally submerged in water, lids off, for 10-12 minutes). You can flavor them with whatever spices you like - although I'm partial to the combination of black pepper, bay, and cinnamon. A friend gifted me a jar of lemons she preserved with fennel seed and pink pepper corn, which was lovely.

And then what do you do with them?

They're pungent, and borderline astringent. They're salty, acidic, and flavor-packed. A little goes a long way. But that little bitt adds notes of complexity. It makes you go: "what's in this?" It both highlights the essence of a lemon, and takes lemons to another otherworldly flavor.

I like to use them in homemade hummus (a la Joan Nathan's recipe in her new cookbook). They're beautiful in chicken dishes, and in tagine (they are a common North African ingredient). I also like to make a simple dip with thick plain yogurt, chopped fresh mint, and super finely chopped preserved lemon.

This recipe works for any lemon, but lemons that are thin-skinned, like Meyer's, seem to work best.

Quarter each lemon by slicing the top down within half an inch of the bottom, leaving them connected. Pack salt into the lemon then press it back into its original shape.

Place the jar on your kitchen counter or in a pantry and shake the jar once a day for 30 days. After 30 days, the lemons are ready for use. Once opened, I prefer to keep my lemons in the fridge. They’ll keep for up to 1 year.

Before using the lemons, rinse each piece as needed to remove the excess salt. 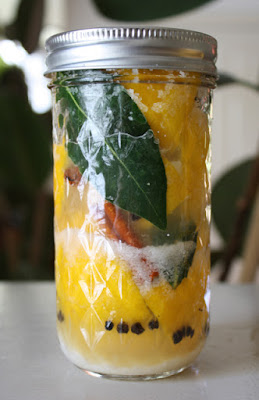