Pickled Watermelon and other "Zakuski 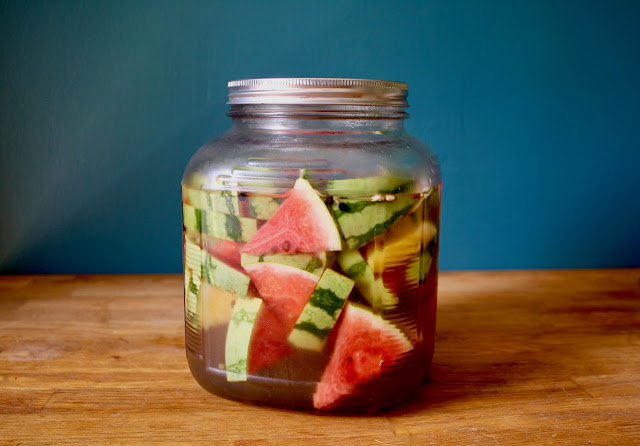 As written for The Nosher

When you are invited to a Russian person’s home you’ll likely enter the dining area to see a table laden with small plates of food. This type of spread is known as zakuski, which translates to “something to bite after.” Zakuski are essentially snacks that are meant to be eaten while drinking shots of vodka or other alcohol. Popular zakuski include smoked fish, cured meats, salads generously dressed with mayonnaise, blini and caviar, marinated mushrooms, and at least one kind of pickle. Pickled cucumber or cornichons are common, but so are all kinds of other pickled vegetables and fruits.

Russians and Slavic people love pickles. Like many great culinary traditions, the practice of pickling and preserving was born out of necessity. The growing season for fresh fruit and vegetables is relatively short and it became essential to preserve the bounty of fresh produce for the dark cold days of winter. Historically, much of the food preservation used salt to pickle and/or ferment as opposed to using vinegar-based brines; this results in a saltier but less sour pickle. Pickled and fermented produce are also valued for their health benefits. Fermented foods can aid digestion and help with good gut bacteria. This is particularly welcome when you’re eating rich and hearty foods. Most importantly, pickles are flavorful. Pickled foods were particularly popular in Jewish communities in Russia and Eastern European, and often because they added bright acidity and strong flavors to complement staple bland foods like bread and potatoes. In fact, Eastern European Jews introduced dill pickles to America during the late 1800’s and early 1900’s when they began arriving in New York.

The practicality of preserving summer food for the winter is clear, but these pickled fruits are equally refreshing on a hot summer day, preferably eaten with a meal outdoors. I’ve picked three of my favorite zakuski recipes to share: pickled sour cherries, watermelon, and peppers. The sour cherries only show up for a short time every year, and I try to get a big bag whenever I see them available. They are great for pie or for compote, but I love them pickled with a little cardamom. They end up tasting like an elevated maraschino cherry - tart, not too sweet, and complex. They’re great in a cocktail, and just as good as a side to BBQ. Pickled watermelon is a classic in Russia, Ukraine, Georgia and other Soviet countries. Russians typically add garlic, bay, and dill to the brine, which makes the watermelon a savory treat. I love to serve it alongside cured meat or grilled sausages, and it also goes well as a pre-meal bite to eat alongside salty snacks served with ice cold vodka (or beer). The pickled peppers are easily my favorite. My grandmother called them “marinated peppers” and they were a staple dish in her home. She served these peppers at the first course of every dinner, and they always managed to stay on the table throughout the meal. I especially loved to have them along with chicken schnitzel and potatoes.

The techniques described in these recipes can be used on just about any kind of produce. The process for the watermelon quick pickle is simple and would work well for tomatoes, cauliflower, green beans, and more. First you make a brine with a combination of salt, sugar, and any aromatics you’d like. You pour the brine over the fruit or vegetables, and then refrigerate. The pickles are ready the next day, but the longer they sit in the fridge, the deeper the flavors are developed. The tangy vinegar based marinade for the peppers would be excellent with mushrooms. And the sweeter brine for the sour cherries would be great with plums or peaches. These pickles last for months stored in the fridge… if you can go that long without eating all of them or sharing them with friends. There’s nothing quite like arriving at a table with many colorful dishes already laid out waiting for you to dig in. It’s an invitation to enjoy, relax, and eat. 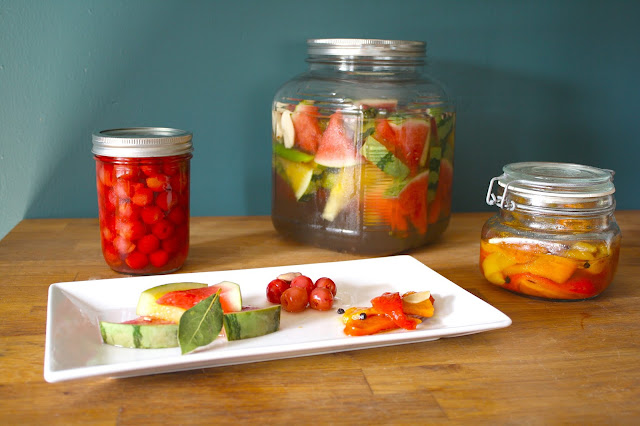 Pickled Watermelon
Wash the watermelon very well, and then slice into desired pieces. I like mine about ¾-1” thick, and cut into small triangles with the rind still on.
In a large glass jar or ceramic crock big enough to hold the watermelon slices, place the dill, garlic, a few of the bay leaves, and the Serrano chili in the bottom. Layer the cut watermelon on top. If necessary, divide these ingredients among jars, and place the aromatics on the bottom of each jar.
In a medium pot, combine the water, salt, sugar, vinegar and peppercorns. Bring up to a simmer, and heat until the salt and sugar is just dissolved. Pour the liquid over the watermelon in the jar(s). Top with the remaining bay leaves and a little more dill if desired. If the watermelon is floating above the liquid, you can weigh the fruit down by placing a small plate inside the jar with something heavy on top.
Allow the mixture to fully cool, and then refrigerate. The watermelon is ready to serve after 24 hours, but it is best if you wait 3-4 days before serving. 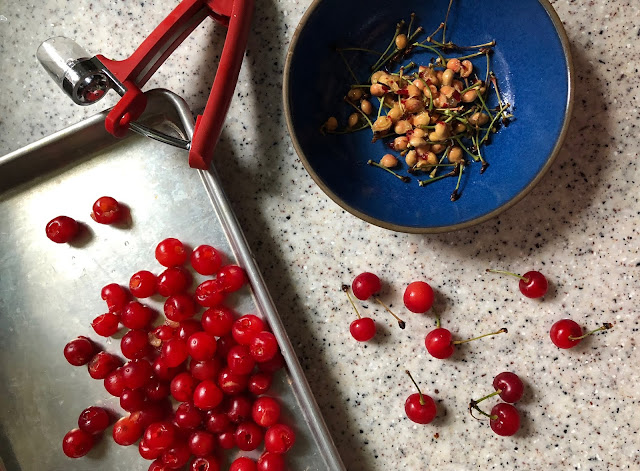 Pickled Sour Cherries
Place pitted cherries in clean jars.
Combine the vinegar, sugar, water, salt and cardamom in a small pot. Bring to a simmer and heat until the sugar is just fully dissolved. Pour the brine over the cherries. Allow the mixture to fully cool, then securely cover the jars and refrigerate.
They are ready to serve after 24 hours in the fridge, but they will develop deeper flavor the longer they sit. 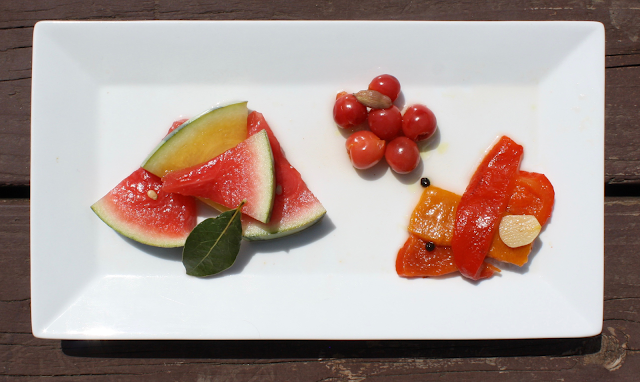 Marinated Red Bell Peppers
Preheat the oven to 425°F.
Lay your peppers out on a lined sheet tray or baking dish. Place the peppers in the oven for 30-40 minutes, or until blackened, softened, and until the skin gets wrinkly and starts to peel off. It helps to flip the peppers over halfway through the cooking process. You can also do this directly over a gas flame or on a grill, turning the peppers until they are blackened and cooked on all sides.
Once cooked, transfer the peppers to a heatproof bowl and cover with plastic wrap. Allow the peppers to continue to steam and cool for 20-30 minutes.
At this point, the peppers should peel easily. Over a bowl, peel the peppers, and remove the stems and seeds. If any juice escapes while you are peeling the peppers, save the juice. It is gold.
Slice the peeled peppers into strips, about an inch thick, or however you prefer. Add the peppers to the bowl of their reserved juices. Add the sliced garlic if using, peppercorns, salt and sugar to the peppers. (If you do not like strong garlic flavor, omit the garlic entirely.) Mix everything together gently. Cover the peppers with white vinegar and water. Add the olive oil. Let the peppers marinate in the fridge overnight before serving. Peppers last in the fridge for about a week.