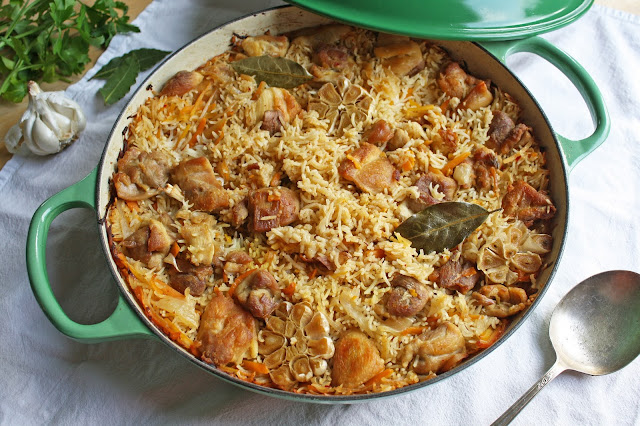 Plov is a rice pilaf-style dish that became popular in the Soviet Union by way of Uzbekistan. In truth, this dish’s origin has a longer story, and one with a Jewish connection. The earliest version of rice pilaf is documented by a 10th-century Persian scholar, and Persian cuisine is well known for its glorious rice dishes and tahdig. Plov can also look like pilau in the UK, pulao in India, and even paella in Spain. Ultimately, there are countless cultures that have some version of a one-pot rice and meat dish. So, what makes plov different?

Plov’s popularity in Russia can be traced back to at least the time of Alexander the Great. Upon returning from Central Asia to Macedonia, his soldiers were said to have brought back plov as one of their new favorite foods. The existence of this dish in Central Asia has a distinct tie to the Jewish community there. The Bukharian Jews of Central Asia are Mizrahi Jews whose lineage goes back to the time of King David, and Ancient Persia. During the reign of Persia’s Cyrus the Great, Jews made their way to Central Asia and formed a community where they eventually spoke a dialect of Persian called Bukhori. Central Asian versions of plov, particularly the Uzbeki variety, were later popularized across all Soviet republics during the time of the Soviet Union.

Soviet-style plov is most commonly made with lamb as its meat, carrots as its vegetable, and is typically spiced with cumin and coriander. However, you will find a wide range of plov made with different kinds of meat or poultry, spices, and even the addition of dried fruits or nuts. I prefer to keep plov simple with traditional flavors. I use chicken thighs for their ease of availability and affordability, and I add loads of carrots and onions, which seem to magically disappear into the rice once cooked. Garlic, bay, cumin, and coriander perfume this plov.

This dish is a one-pot meal. Each element takes a little time, but once all of the ingredients are prepped, it comes together quickly and then gets popped into the oven to finish cooking. It reheats and freezes well, and is hearty and filling. Plov is the kind of comfort food that can be made as much for a special occasion as for a warming weekend dinner.

Rinse the rice well, then place it in a bowl of cold water to soak as you prepare the other ingredients. This helps remove excess starch and makes for fluffy rice.

Cut the chicken thighs into 2”-3” pieces, and salt with 1½ teaspoons of kosher salt and freshly ground pepper. Reserve.

Peel and julienne (matchstick cut) the carrots. Alternatively, you can use the medium holes of a box grater, or the shredder attachment on a food processor to grate the carrot. Peel and halve the onions, then slice them thin. Halve the garlic heads crosswise and reserve.

On medium-high heat, generously drizzle oil into the bottom of a large Dutch oven, or a wide heavy-bottomed deep skillet (at least 12” wide). If you do not have either, you can brown the chicken and vegetables in any large skillet, and then transfer everything to a large ceramic or pyrex casserole dish. Brown the seasoned chicken thigh pieces on each side, then remove and reserve.

Lower the heat to medium, and into the same Dutch oven or skillet, add the onions and carrots. Generously season with salt and pepper, and sauté for 5-6 minutes or until softened. Add the cumin, coriander, paprika, and pepper to the onions and carrots and sauté for an additional minute. Drain the rice that has been soaking, and then add it to the carrots and spice mixture. Sauté and stir for 1-2 more minutes, until the rice is well coated in the mixture. At this point, if you are using a casserole dish, transfer the mixture to the dish. If you are using a Dutch oven or deep skillet, continue the next steps in the same pot.

Add the chicken to the rice mixture, then nestle the garlic heads and bay leaves into the rice. Pour the boiling stock or water over the rice and chicken mixture (the liquid must be at a boil when added in order to cook the rice properly). Make sure everything is covered by at least ¼” of liquid. If not, add an additional ¼ cup of boiling water or stock.

Cover the Dutch oven or skillet with a lid, or cover the casserole dish tightly with foil. Place in the oven for 50 minutes. Remove from the oven, and leave the plov covered for an additional 10 minutes.

Once it has rested, fluff the rice just before serving. There may be delicious browned crispy bits of rice on the edges. If your rice still feels too wet, you can cover it again and put it back in the oven for an additional 10-15 minutes to cook further.