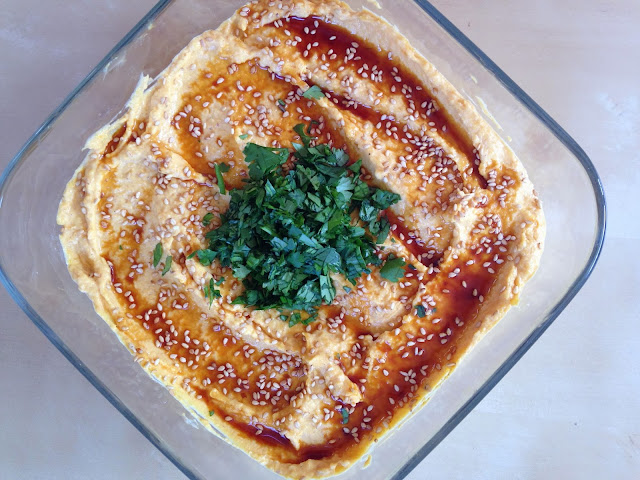 You want to make a dip for a party...
Make butternut squash and tahini Spread!

Yotam Ottolenghi is a highly regarded chef, restaurant owner, and cookbook author.  I might argue that he is one of the most important cookbook writers in recent history.  Straight up, the man wrote a cookbook (Plenty) JUST about vegetables and it was a critically acclaimed, award winning, international best seller.  His recipes work AND they're delicious.

His follow-up to Plenty is a cookbook called Jerusalem, which he wrote with his business partner Sami Tamimi.  The New Yorker did a great profile on Ottolenghi discussing his background and the making of Jerusalem.  In short, Ottolenghi is Israeli-born of German and Italian descent, while Tamimi is Palestinian. They were both born and raised in Jerusalem, and they independently moved to London as adults, where they met and opened the first Ottolenghi restaurant.  The book showcases recipes that come from Arab and Jewish culinary traditions that relate specifically to Jerusalem.

With regards to Jerusalem's cultural and political complexity, they have eloquently written:
Alas, although Jerusalemites have so much in common, food, at the moment, seems to be the only unifying force in this highly fractured place.  The dialogue between Jews and Arabs, and often among Jews themselves, is almost nonexistent.  It is sad to note how little daily interaction there is between communities, with people sticking together in closed, homogenous groups.  Food, however, seems to break down those boundaries on occasion. You can see people shop together in food markets, or eat in one another's restaurants.  On rare occasions, they work together in partnership in food establishments.  It takes a giant leap of faith, but we are happy to take it - what have we got to lose? - to imagine that hummus will eventually bring Jerusalemites together, if nothing else will.

I've been wanting to make this butternut squash and tahini spread since I first saw it in their cookbook. It sounded kind of weird, and I wasn't sure if it would taste good to me. I'm a big fan of squash, and I always have a jar of tahini on hand.  I've even tried tahini sauce on squash in the past, and I loved it. Still, I was suspect of making a hummus-type dip combining both ingredients. I'm also a little sick of everything becoming a hummus (e.g. beet hummus and avocado hummus). I think hummus has been dominating the dip world, and not always in a good way.

Curiosity won and I made the recipe. My verdict: this dip is delicious  It is more savory than sweet, its texture is smooth and pleasing, and its flavor is "different" in a good way.  Having said that, my brother was not a fan.  He wanted something that was either more hummus-y or more squash flavored - this dip blurred those lines. My sister in law really liked it, as did some other folks that tried it.  All I know is that I have none left, and I made at least four cups of the stuff only three days ago.  I guess the verdict is still out.

If anything, your friends will be impressed by the look and uniqueness of this spread.  I like to serve it with pita chips or some other kind of crunchy plain-tasting cracker that won't compete with the flavors in the dip.

Here is their recipe with a few minor additions and changes...

Preheat the oven to 400 degrees Fahrenheit

Cut the squash in half and scoop out the seeds.  Place the squash on a lined baking sheet, and drizzle it with the olive oil,  then sprinkle the cinnamon, cardamom, salt and pepper on top.  Cover the baking sheet tightly with aluminum foil, and roast in the oven for 70 minutes, or until the squash is fully cooked.  Remove from the oven and leave to cool.

Once the squash has cooled, scoop the insides of the squash (including the oil) into a food processor (you can also do this in a bowl with an immersion blender, fork, or potato masher).  Add the pressed/minced garlic, tahini, and yogurt.  Roughly pulse the mixture so that everything is combined into a coarse paste, without the spread becoming too smooth.

*I also think this might be nice with some freshly squeezed lime or lemon on top.  I chose pomegranate molasses because while it adds sweetness, it also adds a nice tangyness. In L.A., you can find pomegranate molasses at Jon's for cheap, or at Whole Foods for not so cheap

**Tonight, I was at Cookbook in Echo Park and I saw this spread in their fridge! 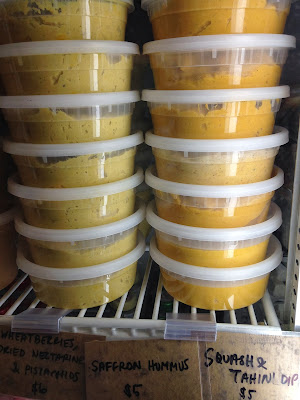