You need a good laugh...
Watch the best cooking show ever!

This is a long story mostly un-related to food or cooking, so if you want to skip it, the short story is that I am obsessed with Tim and Eric's cooking web series. I've seen it dozens of times and it still cracks me up. I aspire to make a show of this caliber one day. Enjoy!
...

My dear friend Lauren (co-founder of the internationally acclaimed Sober and Lonely Institute of Contemporary Arts) turned me on to Tim and Eric.  Lauren is a self-described Tim and Eric superfan. Lauren was born and raised in South Africa, and currently resides in Johannesburg.    She has spent the majority of her twenties traveling around the world attending various artist residencies.  Since the spring of 2012, Lauren has visited Los Angeles 3 times. Once, she came here on a special "birthright Los Angeles" trip organized by an artist, who also happens to be one of my best-friends.  The second two times, she came here as part of two different highly prestigious artist residencies.  The girl is a baller!

Jon (the aforementioned artist who organized Lauren's first trip to the States) decided to surprise Lauren one evening by having me take her to a movie screening where he knew that Eric, of Tim and Eric, would be giving an introduction to the film.  Ok, before we go on let me just say this about Jon: Jon loves to orchestrate crazy plans and surprises, those plans are often complicated and irritating, but once enacted they end up proving to be vaguely magical (for lack of a better word).

Jon couldn't make it to the screening for whatever reason, so as to ensure that Lauren would receive his surprise, he guilt-tripped me into taking her to see the obscure artist documentary.  Neither of us were in the mood to see a movie that night, but Jon had convinced Lauren to go, and I knew that seeing Eric would make Lauren's year.

We arrived at the Downtown Independent theater, picked up our tickets, and took our seats.  Lauren had no idea who she was about to see. When Eric came out on stage to introduce the film, the look on Lauren's face was priceless.  I would have gone to the screening every week for a year just to see someone that happy.  I'm pretty sure she simultaneously squealed and gasped. She was ecstatic!

The movie is called Convento, and it was directed by Jarred Alterman.  The movie was super good and totally fascinating.  After the screening, Eric introduced Jarred onto the stage for a Q&A.  As Jarred took the stage, I sat there thinking: "I know this guy from somewhere." I couldn't pay attention to what was being said, as I kept trying to figure out where I knew Jarred from.  Was he an actor? Had I read about him somewhere? Did I meet him through a friend? After about 5 minutes, it hit me.

Jarred had worked on a documentary project with my brother when my brother was in grad school, and I was still in college.  Jarred and my brother travelled around the country interviewing alumni from their university. Their project took them to Seattle, where I was home visiting my mother.  My brother and Jarred ended up crashing at my mom's house one night, and we all hung out and got along like gangbusters.

After the screening, I went up to Jarred and said, "I know this is weird, and you probably don't remember, but I'm Yuli's sister, and I think you stayed at my mom's place many years ago."  At first Jarred looked baffled, and in an instant, the memory of that experience hit him. Loudly, he said: "WE ATE SALMON PIZZA!!" That was true.  Everyone around us laughed because salmon pizza is funny and kind of gross sounding, and it's even funnier when someone is yelling about it animatedly. The coincidence of seeing each other again at his screening felt meaningful at the time.

After the Q&A, folks were mingling around the bar. Lauren and I got a drink, and soon we found Eric standing beside us.  Despite her shy nature, Lauren manned up and introduced herself to Eric. Eric had been friends with Jarred since high school, which is why he was the MC of the event.  We talked about our connections to Jarred, and about Lauren and South Africa.  Eric was totally nice and gracious. Photos were taken.

These are all small things, but the night still looms large in our personal history.

Because of Lauren, I've become a big fan of Tim and Eric... but I hope you don't try the recipe above, unless you are trying it to make those awesome gloppy sound effects. 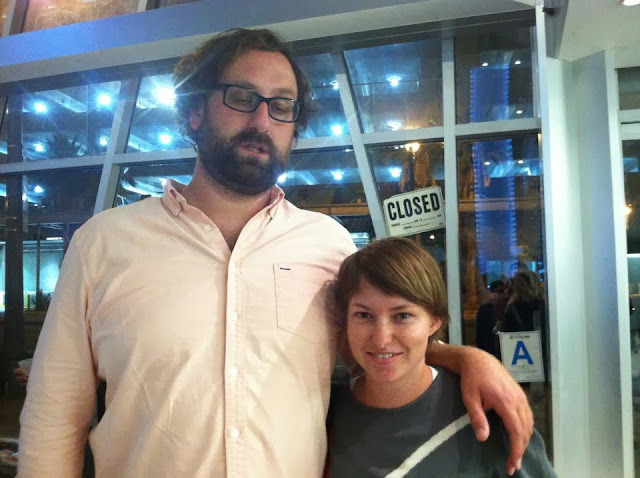