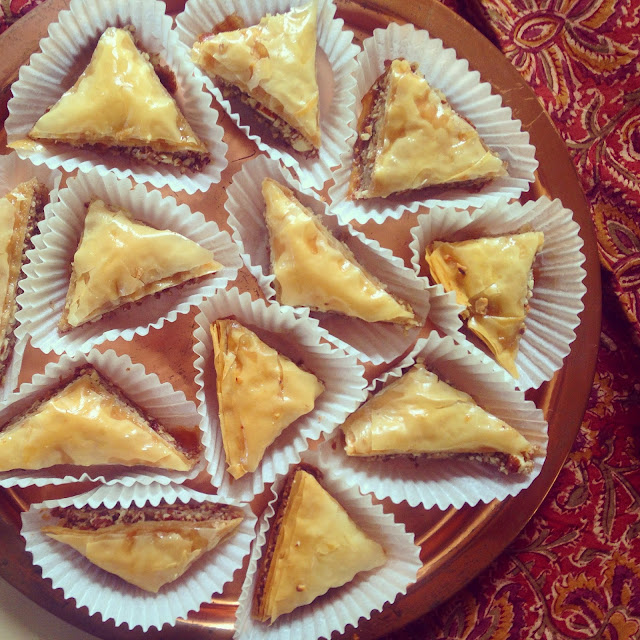 I first learned to make baklava my freshman year of college. It was spring. It was Portland. The days were starting to get longer and warmer, and I was head over heels for a guy I had just started dating.

He was a senior and he lived off-campus in a one bedroom apartment in an old building in the heart of SE Portland. His apartment had hardwood floors, vintage furniture, and string instruments hanging on the walls like art. Compared to my dorm room, his home seemed like a dream. This was 2001 and hipster, foodie and Portlandia weren't things people talked about yet, but he may or may not have embodied all three.

The first night he invited me over to his place he played a record with Yusef Lateef's cover of Eric Satie's First Gymnopedie. I had never heard of either musician. The room, the music, and the easy conversation seduced me. We sat late into the night talking and playing records and at some point he asked me if I wanted a hibiscus tea. He brewed the tea in a small pot on the stove, mixing dried hibiscus flowers, tea leaves, honey and then pouring it into two mugs topped with a little vodka. At that point in my 18 years of limited worldly experiences I had never met anyone quite like him.

One night, he asked me if I would help him make baklava. Even then, I never turned down an opportunity to cook. We chopped up a mix of almonds and walnuts, we blended together cinnamon and sugar, we melted butter and carefully brushed it over individual layers of phyllo dough, and then we made a syrup to pour onto the baklava when it came out of the oven. The kitchen smelled like toasted buttery pastry, cinnamon and sweetness.

Soon after that night he graduated and moved away. We lost touch. I never wrote down the recipe and I have no idea who gave the recipe to him. But somehow, I always remembered how to make baklava and made it many times from that day on.

A few months ago a friend asked me to bring some baklava back from Israel and I told him I could just make him some instead. I hadn't made baklava in 5 or 6 years, but the important parts of the recipe easily came back to me and the rest I figured out or changed to my liking. This time I wrote the recipe down.

About baklava... it's hard to mess up, but it does has a lot of little steps. It's similar to making lasagna; it's all about layering. Traditionally baklava is made with some combination of almonds, pistachios and or walnuts. I'm using a mix of almonds and pecans because I love both of their flavors. Almonds are crunchier and pecans have a caramel-like nuttiness and softer texture that I love. You can use any combination you like.

for the syrup-
1 cup of sugar
⅓ cup of water
1 cinnamon stick
pinch of salt
¼ teaspoon of rosewater (optional -it's a very strong flavor, but often used in the Middle East)
¼ cup honey

Note about the dough - Phyllo dough is generally sold frozen in 1 lb. boxes. You can find it at most grocery stores near the frozen pie crusts. Allow the dough to fully defrost before using. I do this by leaving it on the kitchen counter for 5-8 hours before using (depending on how hot it is that day). If you are an amazing superstar cook and make phyllo from scratch I am humbled and impressed... but this is one of those things I feel ok about buying pre-made.

Prepare all of the ingredients for assembling the baklava:


Now you are ready to assemble: 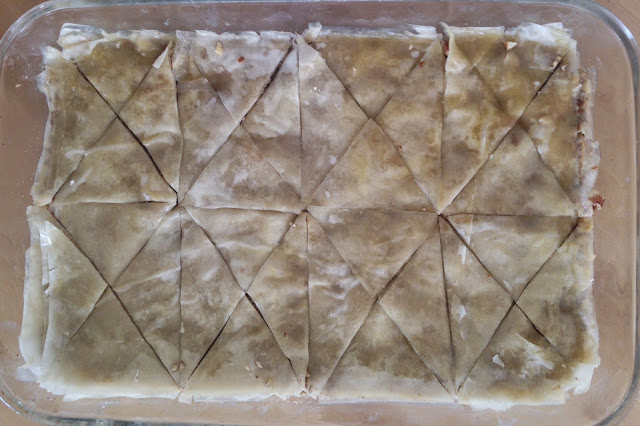 Place the baklava in the oven on the center rack and bake for 40-50 minutes or until golden brown. 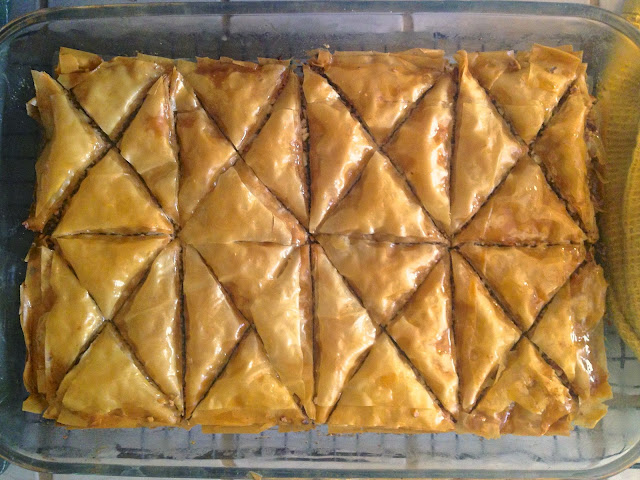