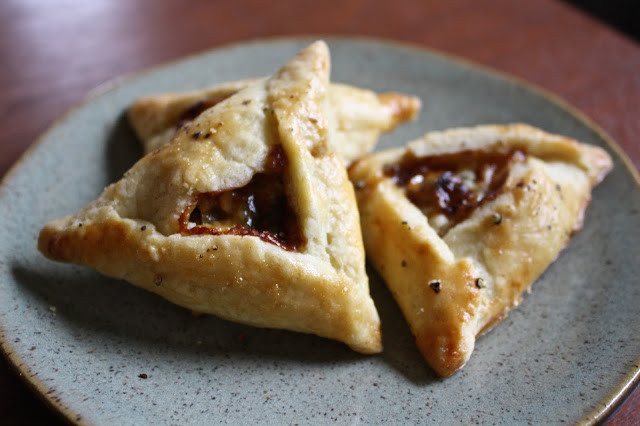 Hamantaschen. Triangular. Filled with stuff. Made for Purim. Meant to resemble Book of Esther’s Haman. Also maybe meant to resemble aforementioned defeated enemy’s ears (in Israel Hamantaschen are called “Oznei Haman” - translation from Hebrew: Haman’s ears). Whatever they are, they are defined by their shape. There are endless variations on their dough, their size, their flavors, and their fillings.

This year, like many other years, I continue to explore the possibilities of what Hamantaschen can be. I experiment with the dough. Egg or no egg? Butter or margarine? Sweet or savory? Traditional fillings or crazy fillings? I'm still seeking my perfect version of a sweet, not-too floury dough (this one comes close), but I am increasingly happy to eat a pastry that is a little more savory. While it has a note of sweetness, this hamantaschen is more appetizer than dessert. The dough is the same used in flaky pie dough or crostatas, the filing has leeks, fig preserves and Cambazola cheese. The result is salty, sweet, and rich.

As a cautionary note, the impulse may be to fill these generously with your filling; exert restraint, it will seem like too little but any more will cause the cookie to overflow or taste too filling-heavy. Another cautionary note, make sure to really pinch shut the edges of each hamantaschen. These tricky guys like to unravel in the oven any chance they get.


for the filling-
2 large leeks, diced
2 tablespoons unsalted butter
½ teaspoon kosher salt
¼-½ teaspoon fig preserves per hamantaschen
½ teaspoon Cambozola or creamy blue cheese per hamantaschen
for the dough-
In a food processor, add the flour, sugar and salt. Pulse a few times. Add the cold cubed butter. Pulse until the mixture forms pea-sized crumbs of butter and flour. (If doing by hand, using a pastry cutter combine the dry ingredients with the butter until pea-sized balls form).


To the food processor add the apple cider vinegar, and the ice water a few tablespoons at a time. Pulse until the mixture comes together in a ball. If the dough doesn’t stick together easily between your fingers, add another tablespoon of water. When it is done, the dough will be slightly crumbly but will easily form into a ball. Form the finished dough into a flattened disc, wrap in plastic and refrigerated for 2-3 hours or overnight.

for the filling-
Clean and dice the leeks. To a skillet over medium low heat, add the butter. Add the leeks to the pan and season them with salt. Sauté until the leeks are soft and starting to caramelize (turning golden but not crispy and browned), about 10-15 minutes


to assemble your hamantaschen-
Preheat the oven to 375°F. Line a baking sheet with parchment paper.


Flour your surface and rolling pin lightly. Roll out the dough until about ¼-inch thick. Using a 3-inch biscuit, cookie cutter, or even a drinking glass, cut out rounds from the dough. Fill each round with ½ a teaspoon of the leek mixture, ½ a teaspoon of fig preserves, and ½ a teaspoon of cambozola blue cheese. Fold over one third of the round onto the filling, fold over a second third, and fold over the last third. With each third, gently pinch and seal the edges of the dough firmly together, forming a well-secured triangle-shaped pastry. Transfer the hamantaschen onto the parchment-lined baking sheet. Make sure there is at least an inch between each pastry. You can re-roll the remaining dough and form more hamantaschen.


In a small dish, beat an egg. With a pastry brush, brush the top of the dough with the egg wash. Top with freshly ground black pepper if desired.


Bake the hamantaschen for 12-14 minutes, or until golden brown.


Once baked, transfer to a rack to fully cool. Serve at room temperature. The hamantaschen can be stored in an air-tight container for several days, if they last that long.