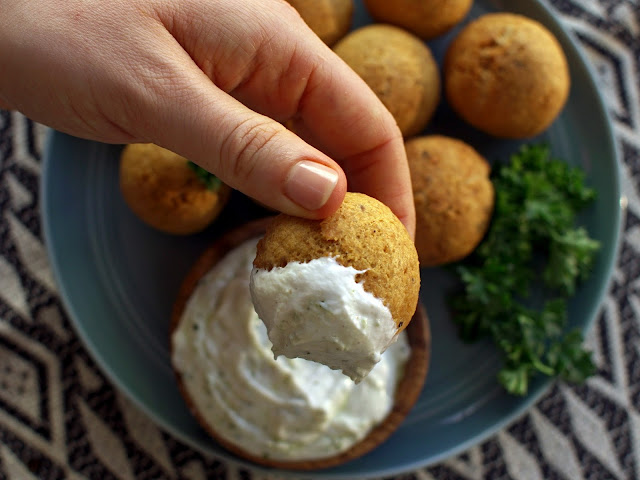 Why do matzo balls need to be confined to soup? In the spirit of freedom, these matzo balls are let go from their usual broth home, and instead,they're dunked into hot oil, fried until golden, and served with a spicy herbaceous schug dip.

These matzo balls are more hush puppy than airy donut. You have to expect denseness with matzo meal. Once you get over the absence of soup, and the slightly unexpected texture, you find yourself halfway through a second matzo ball... they are delicious and addictive.

Schug is a spicy cilantro and chili sauce, that is commonly found throughout the Middle East. I love the recipe from Zahav, by Michael Solomonov (brought to my attention by friend and collaborator Ellie Bowman), but there are many other recipes out there. You can often even pick up this stuff pre-made at your favorite Israeli restaurant or Middle Eastern market.

And we've been putting these recipes into motion over at the Assembly Line.


More Passover recipes are on their way...

Combine the matzo meal, salt, baking powder, and baking soda together in a large bowl. To the matzo meal mixture add 4 beaten eggs, ¼ cup of oil, and spices. Stir until just combined. Chill the dough for at least 1 hour. Once chilled, formed the dough into even-sized balls.

Fill a Dutch oven or heavy bottomed pot with 3 inches of oil. Heat until hot, about 350°-375°F when tested with a candy thermometer.

Drop the matzo balls into the oil in batches. Be careful not to crowd the pot, add 6-8 matzo balls at a time. Fry until golden brown on all sides.

Once cooked transfer to a sheet pan lined with paper towels and fry the next batch. You can can keep them warm in a warm oven if necessary. The fried matzo balls are best served hot and fresh.

for the dip-
In a bowl, combine the yogurt and schug. Mix until incorporated.

*Schug (also spelled Zhug or Skhug)
Schug is a spicy green sauce that originated in Yemen and is commonly eaten across the Middle East. It can be purchased in some Middle Eastern markets, or from Israeli restaurants. This recipe is from Michael Solomonov's Zahav cookbook:

In a food processor, combine all of the ingredients except the oil. Once processed into a coarse paste, transfer to a bowl. Whisk in the oil. The sauce will appear chunky, not smooth. Store in a container in the fridge for up to 1 month. 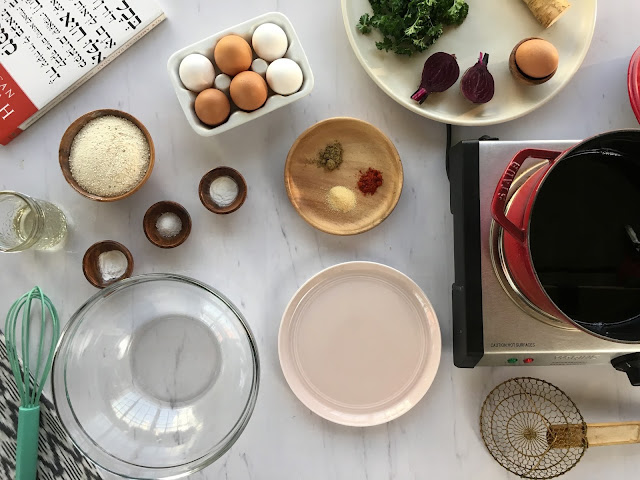