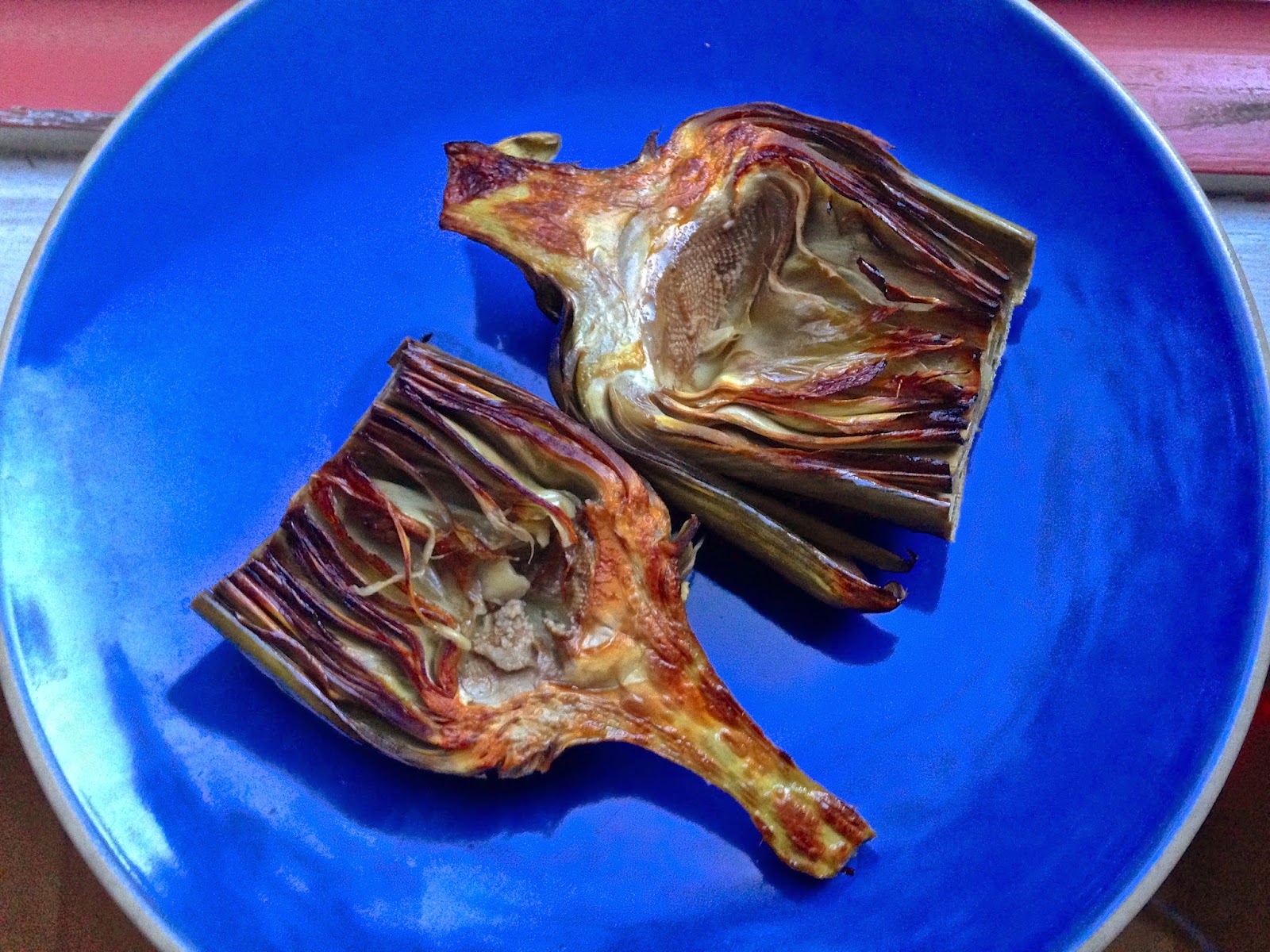 I can never say no to an artichoke. They are easily my favorite food when they are in season. They are also extremely versatile. They can be cooked in a myriad of ways, and they are the perfect vehicle for condiments (the raison d'etre).

Roasted artichokes are genius. I will never steam or simmer an artichoke again. Seriously. These are sooo good. The leaves become soft and tender, and crispy on the edges. As an added bonus, they look golden and beautiful. They're good on their own, and even better served along with your favorite artichoke dipping sauce. This is a perfect elegant spring and summer dish.

First things first, you'll need to clean and prepare your artichoke for roasting. Here's a great tutorial from Mark Bittman. Get a bowl of cold water ready. Squeeze half a lemon into the bowl of water, and then toss that lemon into the bowl. Reserve the other half of your lemon to serve with the artichoke once its cooked. To prepare the artichokes you'll need to trim and peel the ends of the artichoke, remove the tough outer leaves, trim the prickly tops, slice each in half, and remove the choke. Once you've cleaned and halved an artichoke, immediately place it in the lemon water so that it doesn't brown. Move on to the next artichoke and repeat the process. 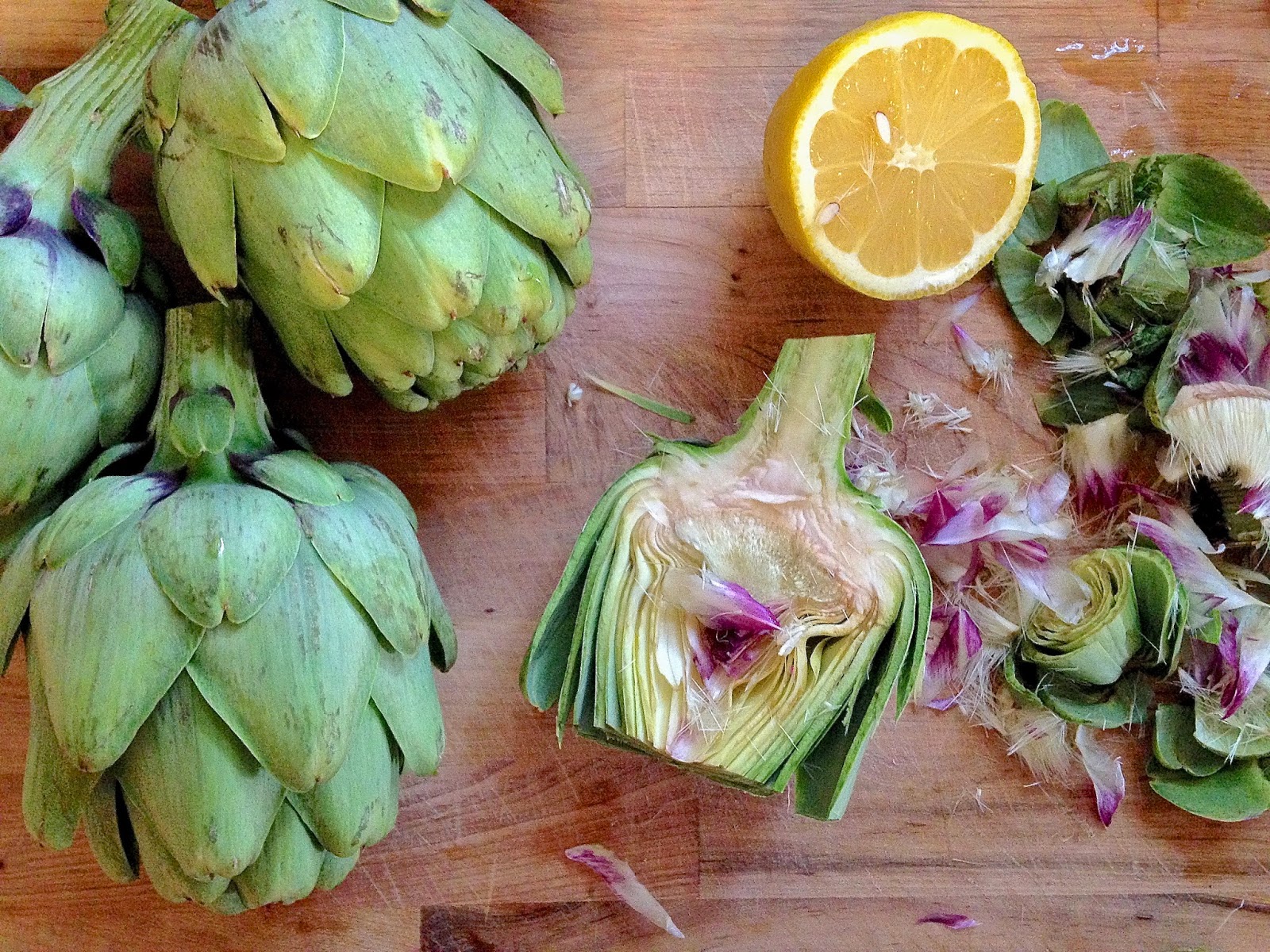 Once you've prepared and halved all of your artichokes, remove them from the water (it's fine if they are a little wet), and lay them cut side down in a lined baking dish. Any baking dish will do, as long as they all fit in a single layer. 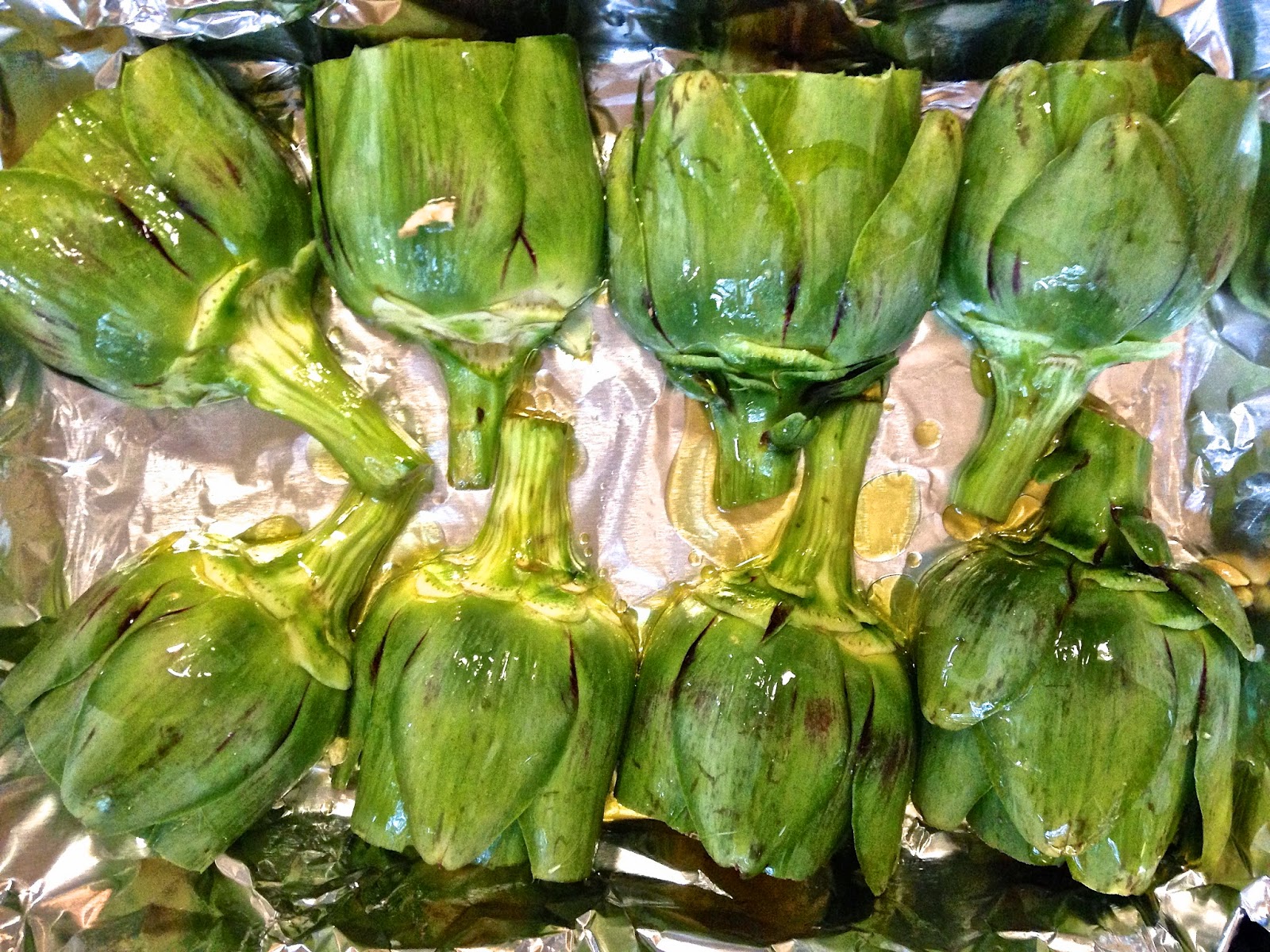 Take the lemon that was sitting in the bowl of water, and squeeze its juice over the artichokes. The lemon should be extra watery. Add a few tablespoons of the lemon water from the bowl into the pan as well. I add a little (not too much) liquid to the pan so that the artichokes slightly steam as they roast. By the end of the cooking process, the water will evaporate, and the artichokes will start to brown. Next, drizzle the artichokes with olive oil. Season with salt and pepper.

Cover your baking dish tightly with foil. Roast the artichokes in the oven for 30-40 minutes or until the artichokes are tender and browned. You can check their doneness by removing them from the oven, unwrapping the foil, and testing a few leaves or piercing the stem. If they seem too al dente or not browned, just rewrap them and place them back in the oven. Cooking time will depend on the size and moisture content of the artichoke.

Once they are cooked, season with more salt and pepper. Serve warm with sliced lemon, or with a dipping sauce.